Rambutan – If you love fruit, these rambutans are amazing. These fluffy red balls hang from trees all over Borneo in August. The trees are native to the Malay-Indonesian region but also grow in Thailand and Viet Nam. The name is derived from the Malay-Indonesian  word for rambut or “hair”. In Viet Nam it is called chôm chôm (meaning “messy hair”). To eat, insert your thumb nail into the red skin and peel off the soft white fruit. Inside this is a large seed. The flesh is juicy and sweet similar to lychee and is an excellent source of manganese.

Jack Fruit – a large green bulbous fruit with yellow flesh inside. The jackfruit is a multiple fruit composed of hundreds to thousands of individual flowers, and the fleshy petals are eaten. It is related to the fig, mulberry and breadfruit and is native to south east India but grows in the lowlands throughout South East Asia. It has a sweet flavour and is used in sweet dishes such as custards and pastry but can also be eaten raw. It is rich in energy and fibre and has a moderate source of potassium and vitamin C.

Durian – this fruit grows on large trees and can weigh up to 3kg and grow to 30cm in length. It is widely grown in South east Asia but probably originated in Borneo and Sumatra. The fruit is known as the king of fruits but was initially described to me as like eating strawberries while sitting on the toilet. The odour is very strong and it has been banned from many hotels and public transport. It is distinctive by its spiky appearance and buttery yellow flesh. Relatively high in fibre it is a good source of thiamin, vitamin C, vitamin A and manganese. 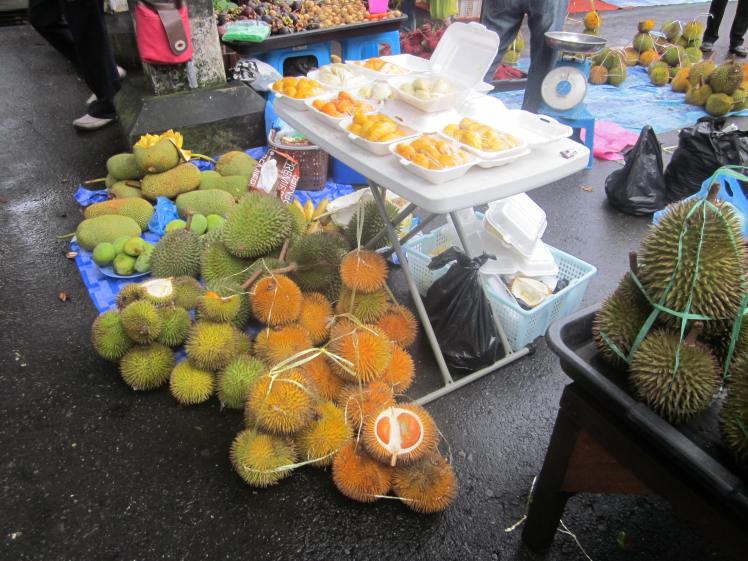 Pomelo – belonging to the citrus family, this giant fruit which can weigh up to 6 kg, originated from China. The name in Tamil is pampa limasu, but in Southeast Asia, it is commonly known as limau besar, limau betawi, or limau serdadu in Malay; jeruk bali in Bahasa Indonesia; sam-o in Thai; lukban in Tagalog; and bu’o’i in Vietnamese. Rich in vitamin C, it has a delicious refreshing flavour and goes well in salads with fish and fish sauce.

Wax Jambu, Rose Apple or Java Fruit – belongs to the Syzygium family. A waxy fruit, it has a bitter after taste and is used for medicinal purposes;  as an anti-diarrhoea agent and as a weak anti-biotic. The bitter taste is due to the high concentration of tannin.

Langsat or Duku – are also native to the Malay Peninsula, Borneo and Indonesia. The plant belongs to the mahogany family and the fruit are sweet, sour and juicy, mainly containing simple sugars.

This photo above also shows from left, papaya, guava, mangosteen, carambola (5 star fruit) and dragon fruit. Other spectacular tropical fruit from the region include the pineapple, mango, custard apple, soursop and bananas.