Cycling the Lower Rhine was a dream we had after our experience cycling along the Danube in 2015. We arrived bright and bushy tailed at the MS Arkona, moored on the Rhine at Kehl, the German side of the Rhine outside Strasbourg.

The river boat hospitality system was very familiar – Theo the hospitality manager greeted us at the gangplank. On his lapel, little flags of England, Germany and France indicated he spoke three languages. All the crew were multilingual. We were shown to our spotlessly clean cabin on the waterline, where we discovered our e-bike batteries, chargers, saddle bags, maps and one front panier for the essential route map. We felt very confident – almost veterans. We inspected our bikes up on deck, including the snazzy battery snuggled into the frame.

At the afternoon welcome we met Frank our guide – a tall, lean cyclist who was more of a showman than a communicator, especially in English. He assured us he had ridden the route many times and it was failsafe. Just follow the white shield with the green surround and the bicycle symbol. How wrong he was! But in blissful ignorance we met our American and British table companions and proceeded to get to know each other over a glass of very nice wine. 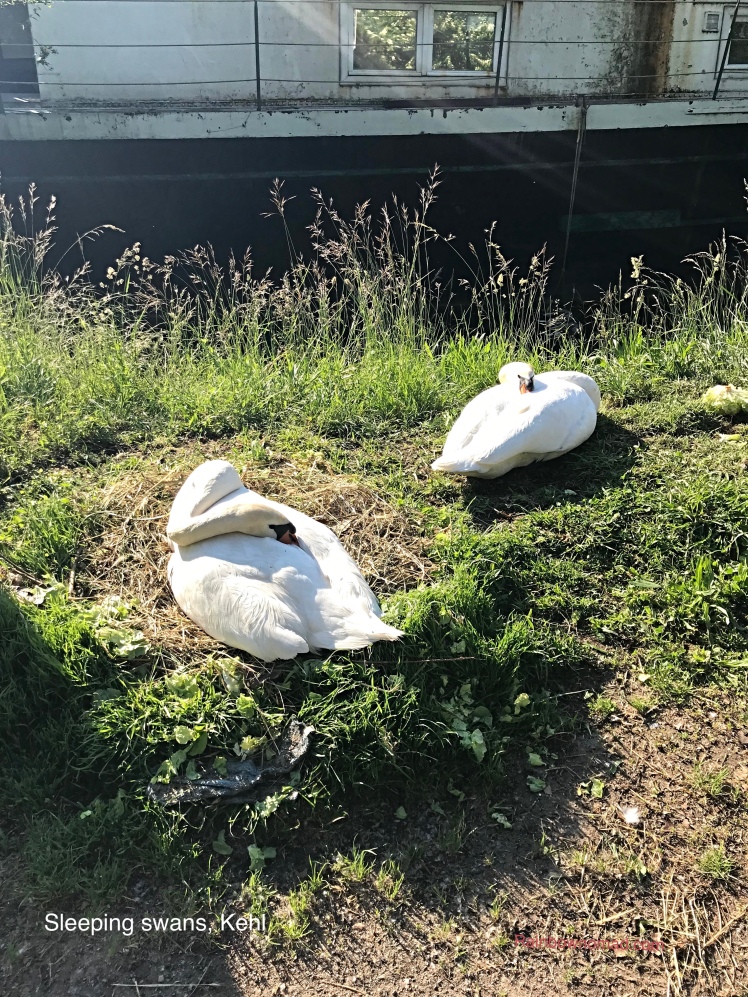 The next morning we sailed from Kehl to Gambsheim, passing through the lock at Gambsheim with a huge barge loaded with containers. We certainly appreciated that the Rhine is a working river. Our instructions were brief and included information about the famous fish ladder at the Gambsheim lock, where fish climb upstream. We needed to do a number of roundabout turns to get over the lock, through the traffic and onto the bike path. Frank assured us it would be easy as it was Sunday and there was no commercial traffic. We all got off at the wrong point and ultimately the traffic stopped while 80 odd mature cyclists finally crossed the road on top of the lock and disappeared over the edge into the countryside. Frank’s final advice was to make sure we were travelling with the flow of the water and to be on the German side of the river.

It was warm and we cycled along pleased to see the water flowing beside us in our direction. The wildflowers along the dikes were beautiful and swans and baby cygnets were everywhere along the route. After a couple of hours we stopped for our packed lunch break and watched as Sunday strollers meandered along the dike. There didn’t seem to be too many cyclists at this point. The path became increasingly gravelly and we suddenly realised we were at the next lock. This was not on any of our instructions, so doubling back we met another 10 of our group who were receiving instructions from a local. We had to get on the main road for a couple of kilometres and then we’d reach where we were meant to have gone – Iffezheim. 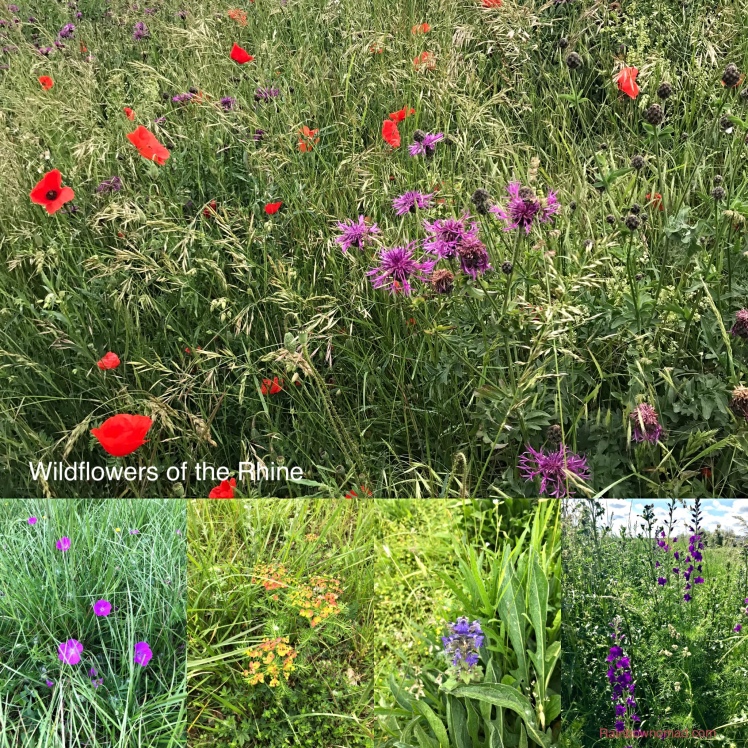 The afternoon became hotter and we decided a coffee break and an ice cream were in order as we rode into Iffezheim. Only 15km to go to Plittersdorf where the boat was moored and where we needed to be by 6pm. At 5pm, we cycled through Plittersdorf reaching the bridge traffic lights. Somehow we then got separated, F disappearing into the afternoon light blending in with all the Sunday family traffic in his bluey grey polo shirt. Straight ahead was forest, to the right was water and the white shield with the green ring and cycle emblem pointed in both directions. I went right, following the water. After all I was looking for a boat. Increasingly I became aware I was totally alone! Where were all the others? Should I call Frank? For some reason both maps had ended up on the other bike! A hasty conversation with a pedestrian indicated I should have taken the other route over the bridge and through the forest. Some time later I was reunited with my very frazzled partner, who’d been back and forth along the last bit of the route looking for me. My only excuse ‘I lost sight of you!’ had something to do with ageing cataracts. 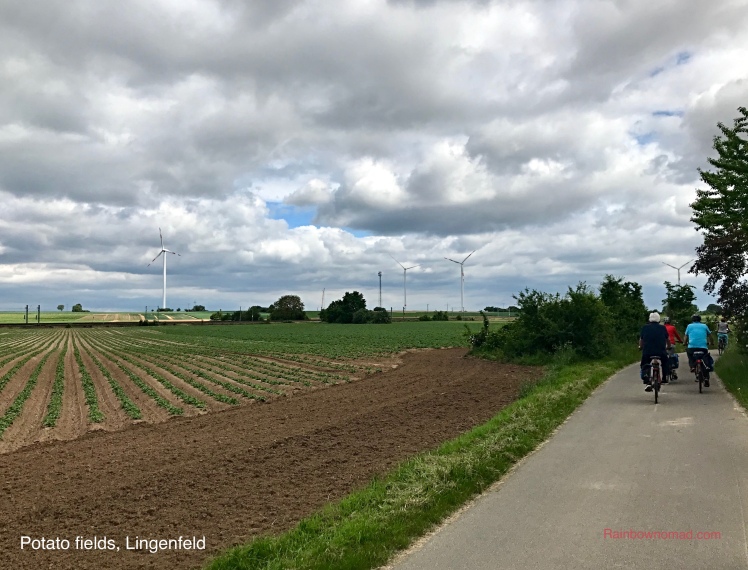 We recovered and the next day made sure I was the leader with the map and we both had our motors set on ‘tour’. I’d been cycling on ‘eco’ and wondering why at a speed of 20km/hr that we’d agreed on, I was always falling behind. We cycled 20kms from Germesheim to Speyer. This route took us along the old Rhine, with several bow lakes filled with bird life. Cranes were flying in and out of the waterways and the flowers were abundant. 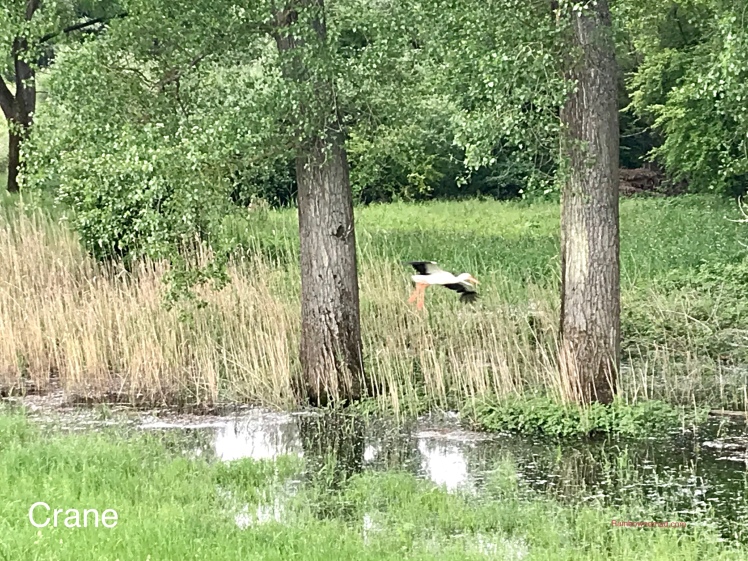 We had intended to have a coffee stop in Lingenfeld but found ourselves in Speyer well before the arrival of the Arkona. Exploring the Cathedral, we ate our bread roll beside the fountain and adjourned to the Biergarten beside the landing site, while the Arkona hung around waiting on an earlier boat to locate its errant passengers and move away. 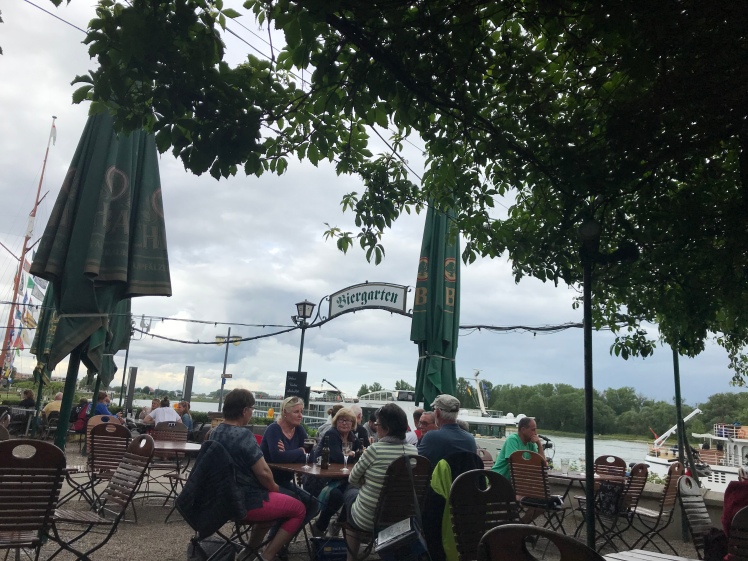 It rained heavily overnight and was cold as we prepared to make the next stage from Speyer to Mannheim. Our instructions were to cross the river by ferry at Altrip. The flowers on this section of the old Rhine were spectacular and information on the regeneration of the environment to support bird and wildlife was posted along the route. Determined not to miss our morning coffee stop this cold morning, we diverted into Altrip which was celebrating 1650 years of settlement. It seemed appropriate to have a coffee and a Rhabarbara pastry. 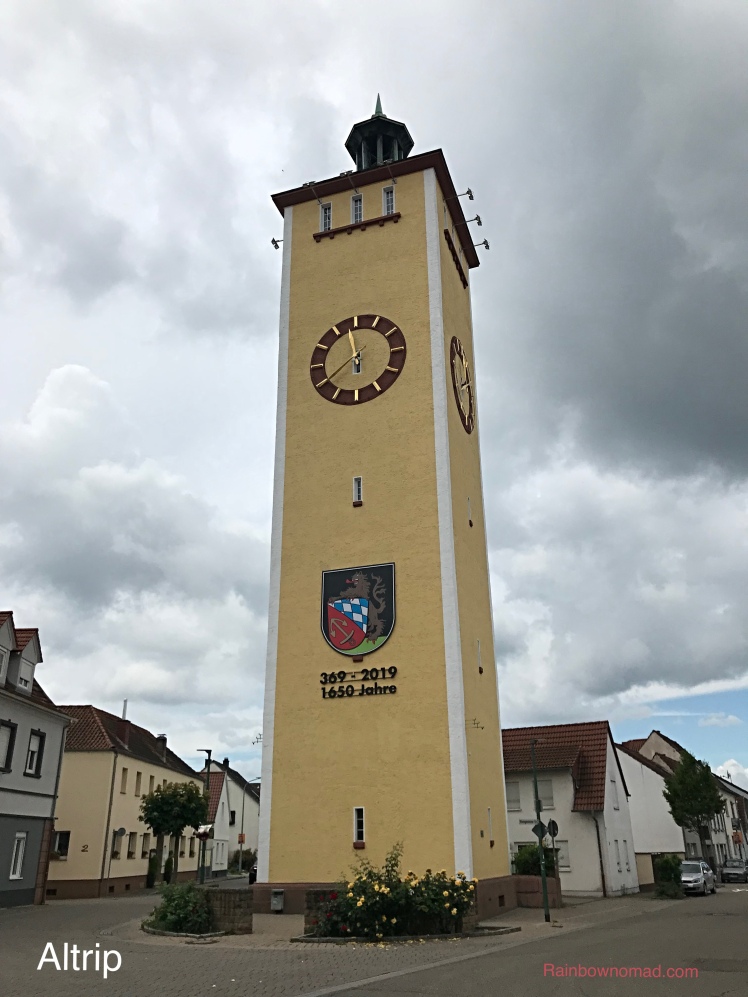 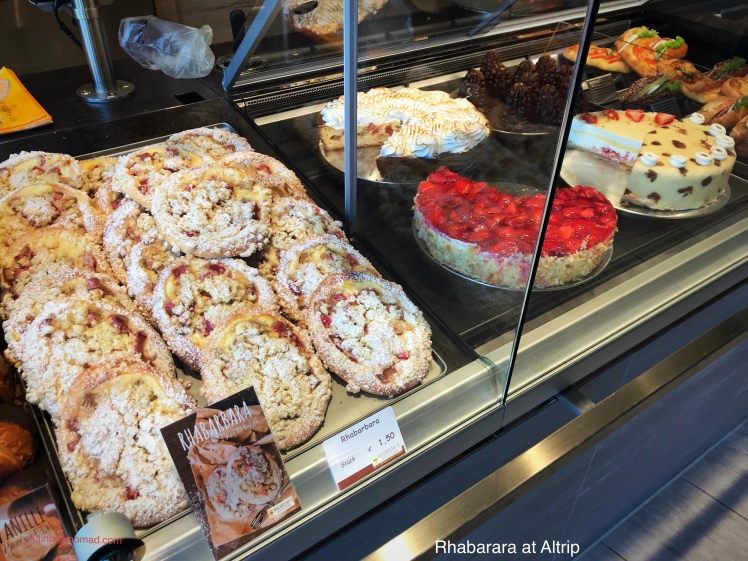 The ferry took us side ways across the Rhine current and we had a great view of the clean coal energy plant on the outskirts of Mannheim. Germany is no longer mining coal but is still processing it. The white coming from the chimney stacks is vapour.

Cycling along a reclaimed wetland area we finally arrived at Ludwigshafen am Rhein. Here at dusk, the huge beech trees feature thousands of green parrots, a legacy of an earlier inhabitant who let his pet parrots out of their cage. Somehow they were able to adjust to the northern climate and breed. It was a wonderfully familiar sound for us.

Our next destination was Heidelberg, up a tributary of the Rhine, the Neckar river. Frank’s instructions and the map were typically brief and somehow we missed a whole loop of the Rhine as we followed the ubiquitous white shields with the green bicycle. We did arrive at the desired first stop destination Schwetzinger, which has a fabulously baroque palace and formal garden. 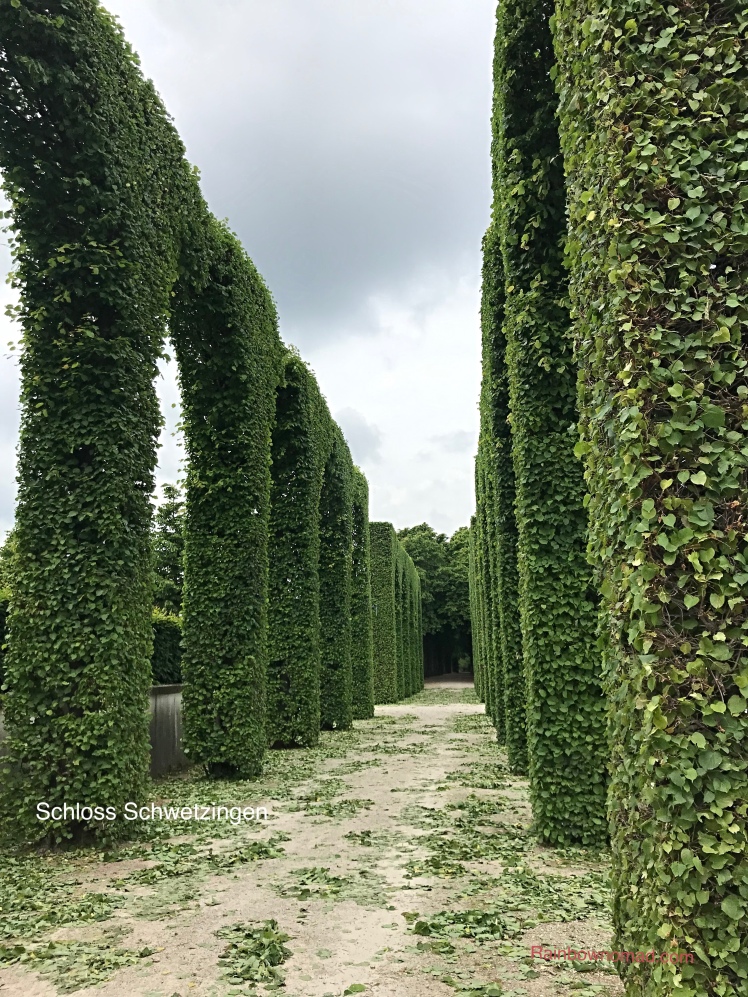 Riding into the beautiful university city of Heidelberg from the countryside was no mean feat. Frank had told us we needed to cross the main junction railway line and to watch out for Heidelberg cyclists because they ride very fast. Well, we came meandering in having gorged on fields and flowers all afternoon. Heidelberg before you reach the Altstadt or old town is a very busy metropolis. Once we hit the city, we just rode. There was no opportunity to consult the map, because the traffic lights needed attention and the student cyclists were whizzing past us at great speed. Having to think ‘Keep right’ to avoid collision was paramount but very unfamiliar for us left handed drive people. Somehow we got near the river, when a wonderfully helpful young cyclist dismounted and asked ‘Can ich dir hilfen?’ Fortunately one of us could understand the directions she gave. Heidelberg however did not disappoint. A wonderful old city, built into the surrounding hills, the castle wall in ruins above, oozing history and learning. 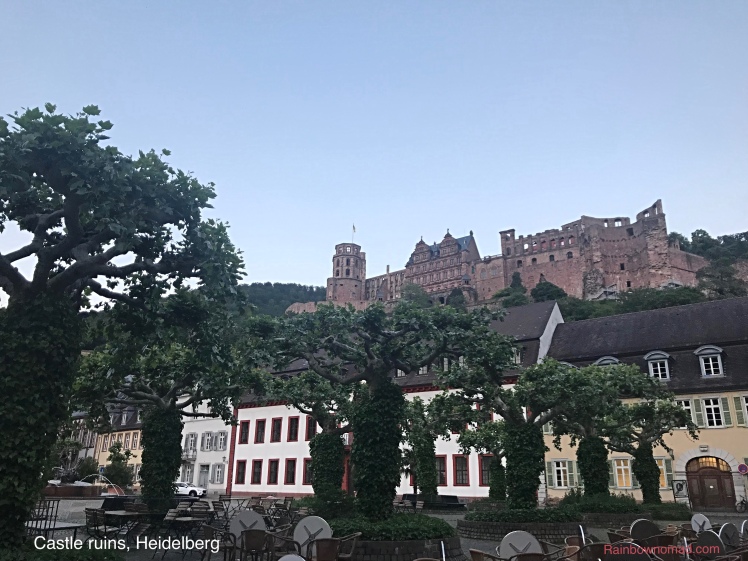 Our English table companions had taken the day off coming into Heidelberg and told us of the pleasant experience of sailing up the less hectic Neckar river, so our American friends and we decided we would do the same on the reverse trip back to Worms via Mannheim. It was a great rest day.

Our final day involved cycling from Worms to Mainz. The first section included the vineyards at Nierstein. We’d been waiting for this experience all trip. It was beautiful but all too brief.

Mainz is the birthplace of Gutenberg who invented the printing press system which made the bible available in multiple copies and transformed the distribution of information in the 15th and 16th centuries. We had seen his statue in Strasbourg and were fascinated by the museum in Mainz where the original printed bible and the hand written earlier versions can be viewed. 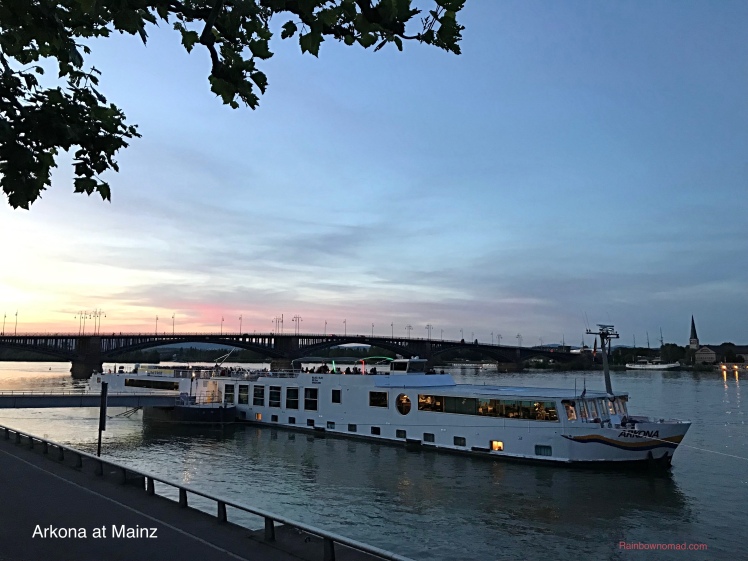 The evening was balmy and we had a great relaxing final celebration. Apparently Frank was delighted he had had only one phone call over the whole trip! Someone with a flat tyre. The rest of us had somehow muddled through! And we were certainly not the only lost souls. In fact, we were quite proud of our achievement.

2 thoughts on “Cycling the Lower Rhine”