Our first 24 hours in Tbilisi were a bit of a blur, so returning at the end of our trip we were determined to experience the famous sulphur baths in the Abanotubani district. 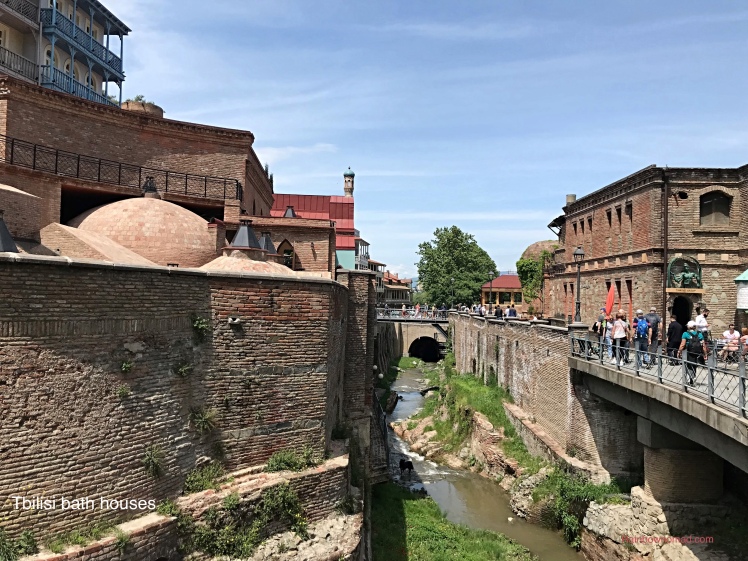 The warm springs which erupt from the Mtvari river were discovered when Vakhtang Gorgonsali’s falcon dropped to earth right at the site of these springs around 430AD. Vakhtang was the king of Iberia or Kartli and decided to establish Tbilisi, meaning ‘warm place’ as the capital of Eastern Georgia on the site.

We had seen a statue of Vakhtang on our city tour, standing high above the city near the fortress. He was supposed to stand several hundred metres tall and he did present a commanding presence, along with the Mother of Georgia, a huge aluminium statue which stands near the fortress. Built in 1958, the woman holds a cup of wine in one hand to greet friends and a sword in the other to deal with enemies and represents the protector of Georgian people.

But returning to the springs. The Abanotubani area was used by tanners to wash their leather and for watering cattle by those entering the city. Legend has it that no one could enter Tbilisi unless they had bathed first in the springs. We passed the entrance of the Chreli Abano on our way down from the fortress on our first day and admired the beautiful mosaics. We were determined to return.

So on our last evening, we asked Eka what was the procedure for a sulphur bath. She advised us to book a room for two people for 70 gel (A$35) for an hour. When I asked what does one wear, her response was ‘Nothing!’ as if I was a complete ninny. I meant of course, what does one take to such an experience. Then she provided more detail – bring a towel, there will be a change room, wear a cap so your hair doesn’t smell of sulphur and you can pay for a massage separately. 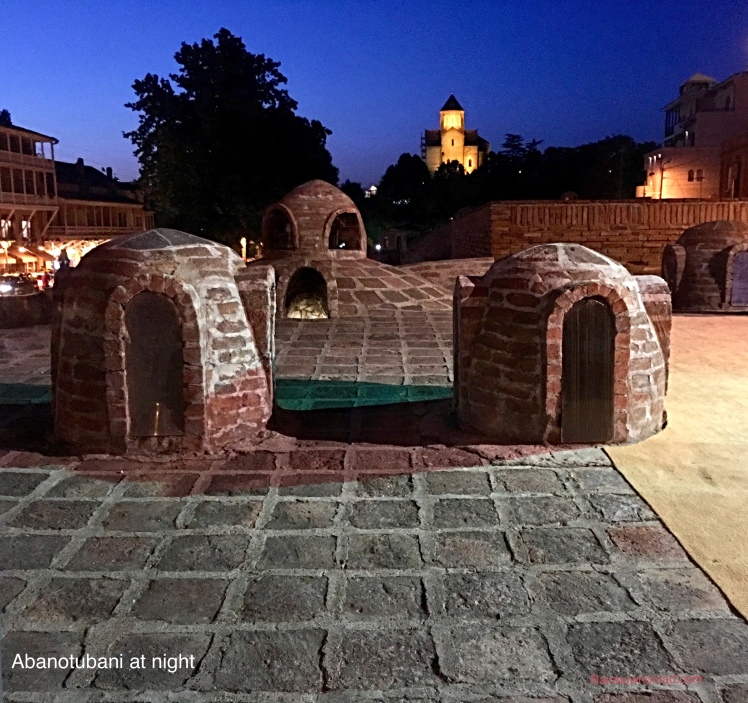 Off we went at 7.30pm. The Abanotubani area is a warren of brick domes and after trying two wrong ones we were finally directed to the mosaic splendour at Chreli Abano. I had previously thought it was the mosque – silly me! We trekked down two flights of marble stairs to a beautifully lit foyer framed by a mosaic maiden with flowing hair at the end. We were asked to wait and told that the massage would be woman for woman and man for man. People came and went in towelling robes carrying buckets while we waited. This was like nothing we’d ever experienced before.

Finally our turn arrived and we were ushered into our own room, with change room leading into the bathhouse, tiled in blue mosaic, with bricked walls leading up to the domed roof. There was a small pool with graded steps and beside it a tiled bed, with a sink at the head rest. It was warm and smelt slightly mouldy. 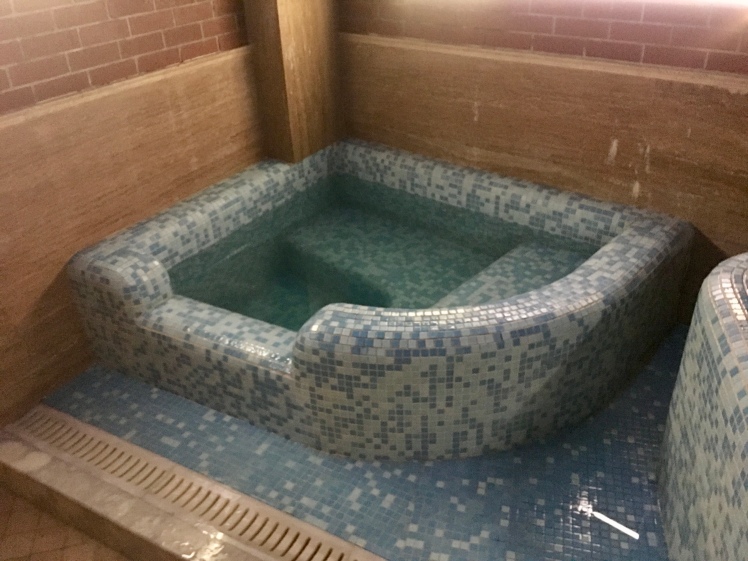 So, into the water we hopped, me sporting nothing but a hotel issue shower cap. The water was so hot that we could only stand it for about 10 minutes before going and standing under a cold shower. Soon there was a knock on the door and a muscular woman in shorts and gym top arrived with a bucket and pointed to me. Sit up on the bed, she pointed. No English, only Georgian or Russian. A scrub began all over, then the bucket was filled with water from the sink and thrown all over me. Next I was directed to lie face down on the bed. A massage followed. The bucket was filled again, this time with soap suds and a rather strange fabric towel smothered in suds and waved over my back. It felt wonderfully silken except when I was directed to turn over I was like a huge slippery eel. More buckets of water were sluiced around and thrown about. At the end of this, I had to slide off, still clad only in my shower cap and find the 20 gel to pay her directly. Not a word was spoken. I retreated to the hot bath. Next minute there was another knock and a man with bucket arrived to repeat the whole procedure with my other half. We got the giggles. One of us had our iPhone in a plastic sleeve. This masseur had a great sense of humour and some English. He encouraged us to take photos – but none of those are gracing this blog! However the site of a naked person sitting on the tiled bed covered in soap suds like a phantom ghost was truly hilarious. 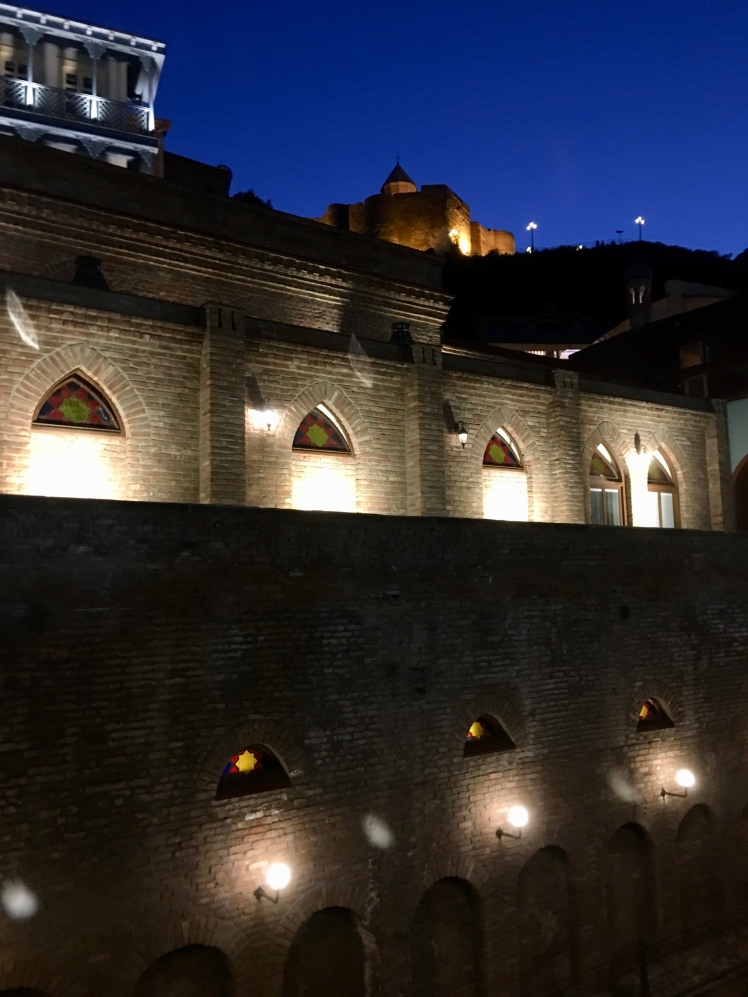 We emerged feeling light as air and indulged in our last Khachapuri with a beer, right next to the little statue of the Tamada, the Toastmaster who moderates Georgian behaviour at the table and how much wine they drink. What a way to end our time here.