Mount Shkhara, Ushba and Tetnuldi are the highest mountains in the Svaneti Region of the Caucasus Range. Mt Shkhara towers over the remote villages of Ushguli at 5058m. Mt Ushba and Mt Tetnuldi, so the legend goes, were lovers whose families would not agree on their marriage, so Tetnuldi turned into a mountain whose snow never melts and Ushba, joined her turning his face to her across the valley. When either is sad, they both are shrouded in mist.

We began our journey in cloud and misty rain from the Enguri River dam, the second highest dam wall in the world. Gela skilfully manoeuvred the Mercedes bus up endless hairpin bends as we climbed to 1500m, finally reaching Mestia in the late afternoon, its stone towers standing out in the fading light. 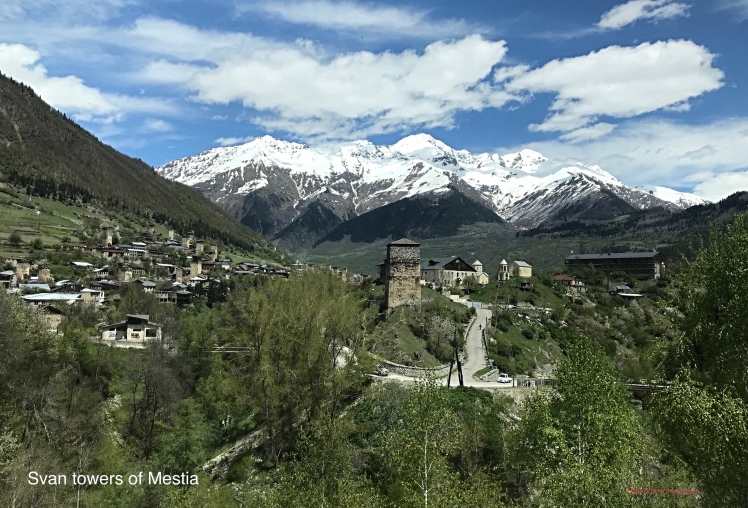 The Upper Svaneti Region is characterised by distinctive towers which date back to the 12th century. They were used to denote the dignity, faith and name of the family who built them but were mostly used by the families in times of siege from raiders or avalanches. Whole families of up to 20 people and their animals could be accommodated. Today the whole area from Mestia to Ushguli is UNESCO listed. Eka informed us that UNESCO has forbidden Georgia to repair the roads, to preserve the remote heritage of the area. So apologetic signs appear, erected by the Georgian government in an attempt to explain to tourists why we cross washed out slips everywhere. The roads were challenging, even for experienced drivers.

Mestia now has its own airport and a power station on the Enguri River and is rapidly accommodating more tourists. We settled into the Mountain Mestia hotel with views to Mount Tetnuldi and the Zuruldi Range. Spring had transformed apple and pear trees into blossom and the fields were a yellow carpet of buttercup and dandelion. 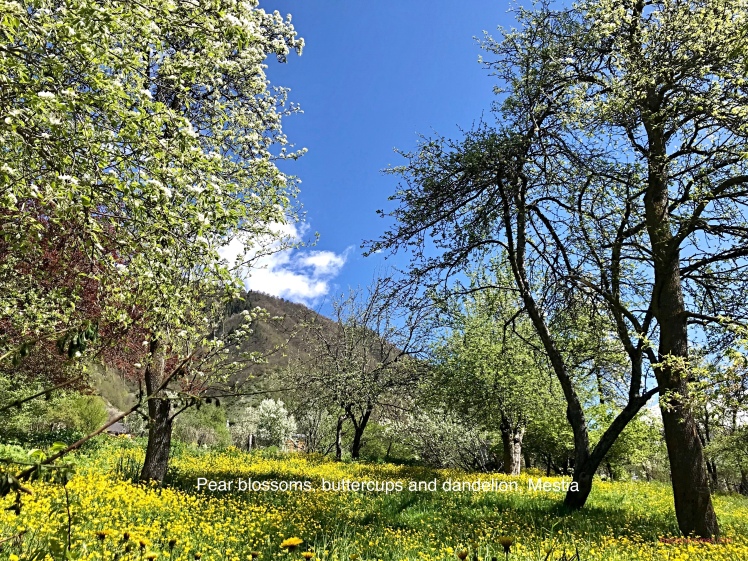 Traditions continue however. Cows have right of way on the roads and we visited the Margiani traditional homestead or Machubi to learn about how people lived centuries ago. 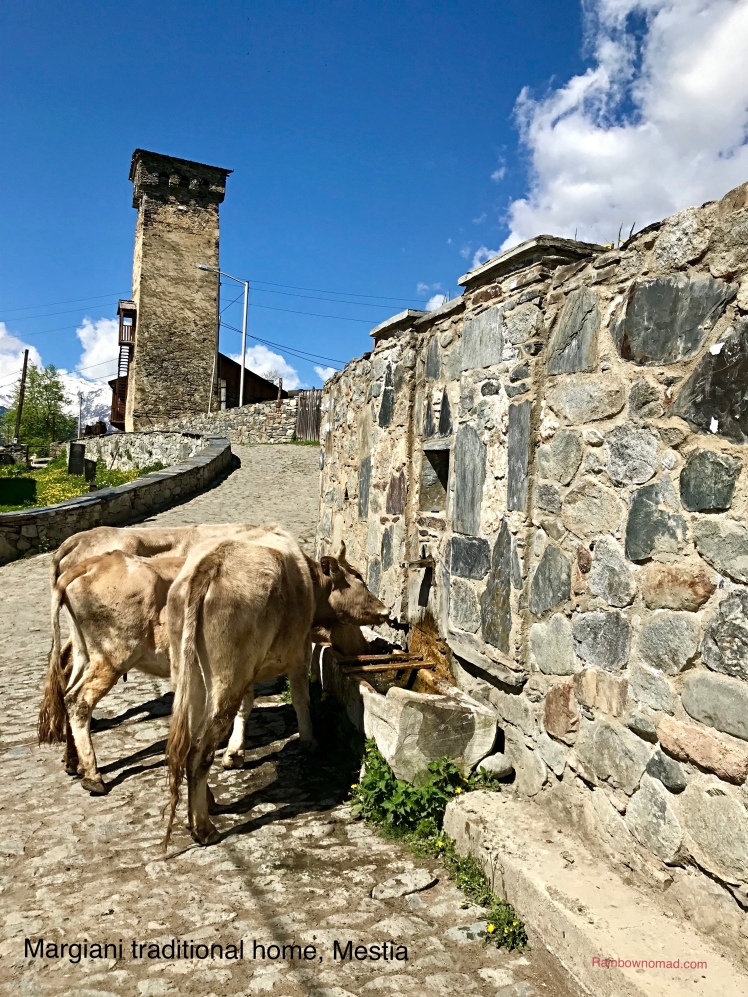 The Machi was the head of the family and had his own carved chair. Machis resolved disputes in the valley as there were no police and the region practised self-government, the Machis making sure that Svaneti blood remained pure with no intermarriage outside the Svaneti Region. To this day, the Svan oral language remains intact. 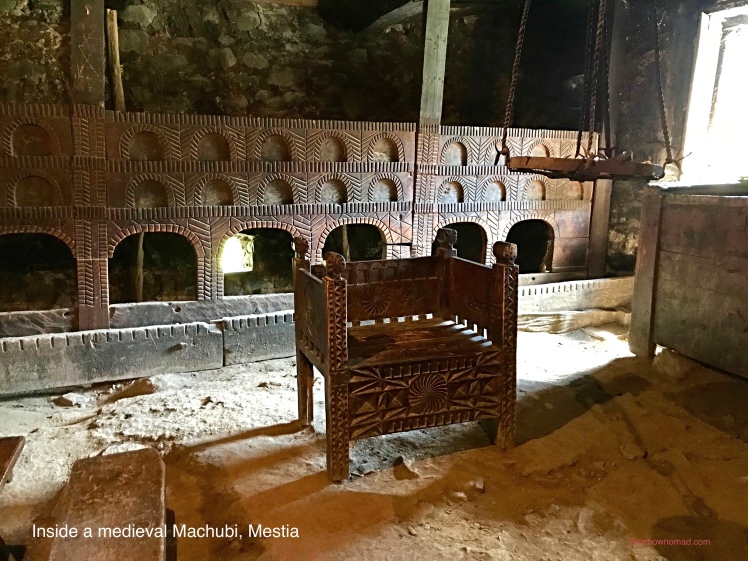 Our second day involved a 4×4 wheel drive, climbing 700m to Ushguli along a road snaking up a ravine.

Waterfalls underwashed the uplifted shale as we ground and bumped our way upwards. A pit stop involved a rather primitive arrangement straight into the gushing river below.

We climbed up to the Lamaria (Virgin Mary) church, the highest in Georgia and were allowed entry eventually by the stern priest, who was more intent on his mobile phone conversation!

Facing us was the pristine snow of Mt Shkhara. We needed to hurry along the 7km climb to the mouth of the Shkhara Glacier, though, before the predicted storm broke. A large Georgian mountain dog accompanied us. 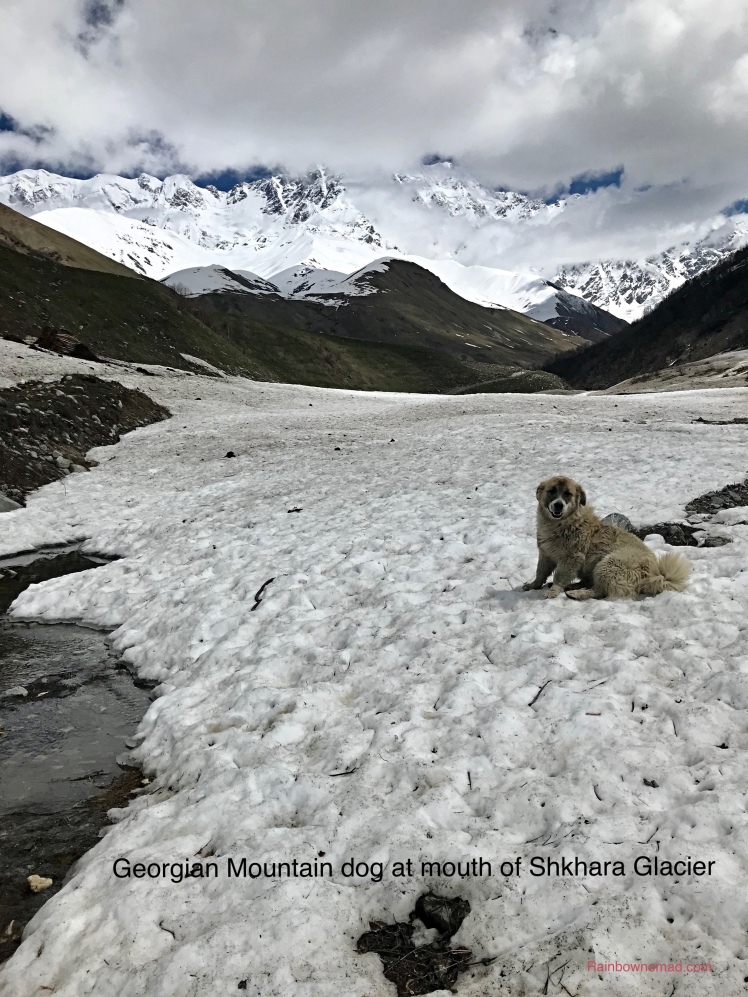 We slushed along in the icy snow climbing up to 2300m. Some of our party had decided to turn back early and on our return it was clear that we had lost Mrs Margaret! Levels of concern were raised. Had she perished in the river or got lost hiking down from the church? Eka and one of the drivers formed a search party. We need not have worried, as Mrs Margaret had joined our sister TripADeal group and was happily enjoying her lunch!

On our final day, the highlight of the whole trip was taking the chairlift to the ski resort at the top of the Zuruldi range at 2340m where we had a 360 degree view of the whole mountain range. Our breaths were taken away by this beautiful country, its resilience and its ancient traditions.