If you think these names are unpronounceable, you are right. Mtskheta and Uplistsikhe, however are important for their ancient monasteries and their unique heritage. In our 12 day tour of Georgia we visited 15 monasteries or churches and most involved climbing up steep hills or steps. The reward was always the view and learning more about Georgia’s fascinating religious culture. Churches and monasteries were the focus of art, language, wine and honey making and strategic protection.

Mtskheta stands at the confluence of two rivers and was the site where Christianity was proclaimed in 337. We walked up to the Jvari monastery overlooking the town.

The monastery dates from the 6th century, St Nino having erected a cross on the site of a pagan temple here in the early 4th century. It has intriguing carvings over the portal. The Georgian cross surrounded by a circle representing the twelve disciples, supported by the archangels Gabriel and Michael. Inside the dome soars 25m above the altar. Our guide, Eka murmured beside me that she was married in this church 19 years ago. 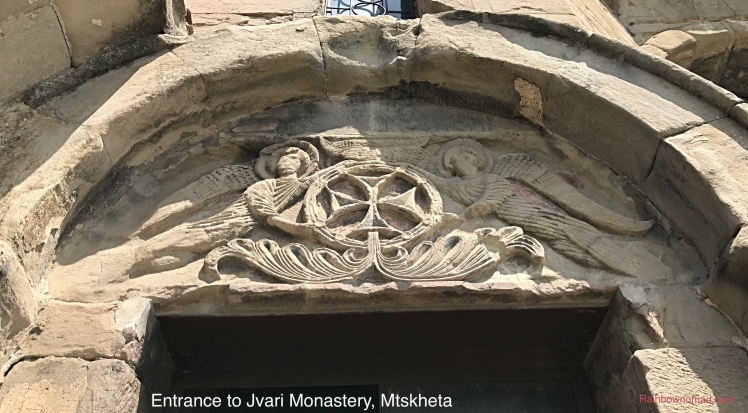 Below we could see the shining domes of the 11th century Svetitskhoveli Cathedral, the headquarters of the Georgian Orthodox Church. Inside are the tombs of the many kings of Georgia and supposedly the relic of St Nino’s robe.

The current church although constructed in the 11th century, stands on the remains of earlier churches from the 4th century. The frescoes inside date from the 17th century. Many devout people wandered about overseen by a priest in black, with a long beard, who unsuccessfully tried to keep the noise down. The acoustics were excellent!

Uplistsikhe on the other hand is a complex of caves dating back to the 4th century BC and is thought to be the site of earliest Georgian settlement. Archeologists have confirmed many of the structures were sites of animal sacrifices and supported 20,000 people over 8 hectares. The caves were a strategic site on the Silk Road being an important trading centre between the east and west. When we arrived people were clambering all over the complex. The sandstone steps cut into the rock were quite slippery, with no hand holds. Eka showed us evidence of ancient wine presses, Roman and Greek amphitheaters and the first European pharmacy. We climbed up to the 11th century church on the crest of the hill to look down on the Mkvari river below.

Our journey continued on to Kutaisi, which is the legal capital of Georgia today and previously the main capital, when Tbilisi was under threat from Persian invasion. We visited the Gelati Cathedral and Academy and Bagrati Cathedral on Sunday 12 May, which is a public holiday, St Andrew’s Day. Andrew, one of the 12 apostles, visited Georgia, then known as Iberia in the 1st century, preaching Christianity, although the conversion of the country occurred later via St Nino in the 4th century. 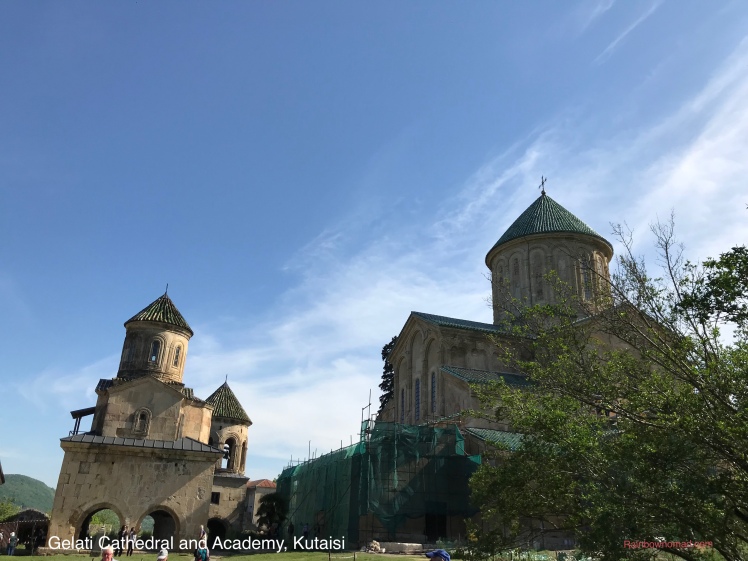 The Gelati Academy, a place of learning for boys in the Greek traditions, dates back to the 4th century. Here is the tomb of David the Constructor, from 12th century. We had heard extensively from Eka about King David and his legacy of stabilising Georgia in the 11th and 12th century introducing a Renaissance in art and culture. David’s aunt, a Byzantine princess invented the fork and other civilising traditions, such as having men and women sitting and eating together! 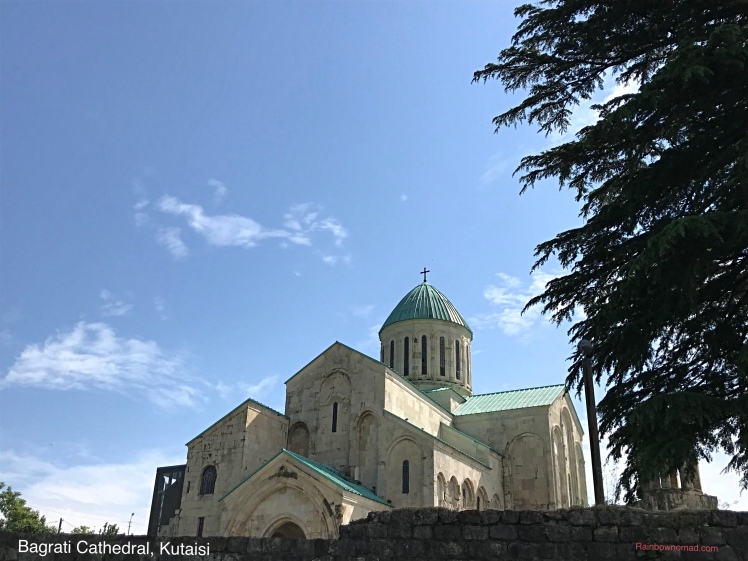 It was a special celebratory day and the cathedrals were full of worshippers. A baptism was taking place in Bagrati Cathedral and outside traditional musicians were singing Georgia’s national song. Inside we heard the unique chanting of several groups of worshippers just standing together some quite young, with an older conductor. Apparently chanting in Georgia follows a 7 polyphonic method and is so unique a recording was sent to the moon as part of a UNESCO heritage deposit.

Everything described above has some UNESCO listing. We were in the land of unique traditions and monuments!

One thought on “Monasteries, Mtskheta and Uplistsikhe”