The Finnmarken cruise ship was waiting to whisk us into the fjords at 5pm. Briefing by Magnus and Petter our ship expedition leaders included the recommendation to purchase spikes, in case we slip over on the ice. With great difficulty, we stretched these rubber contraptions onto our boots and I tried them out in Urke, clonking along the perfectly dry paved roads. Obviously a total green horn to polar conditions. 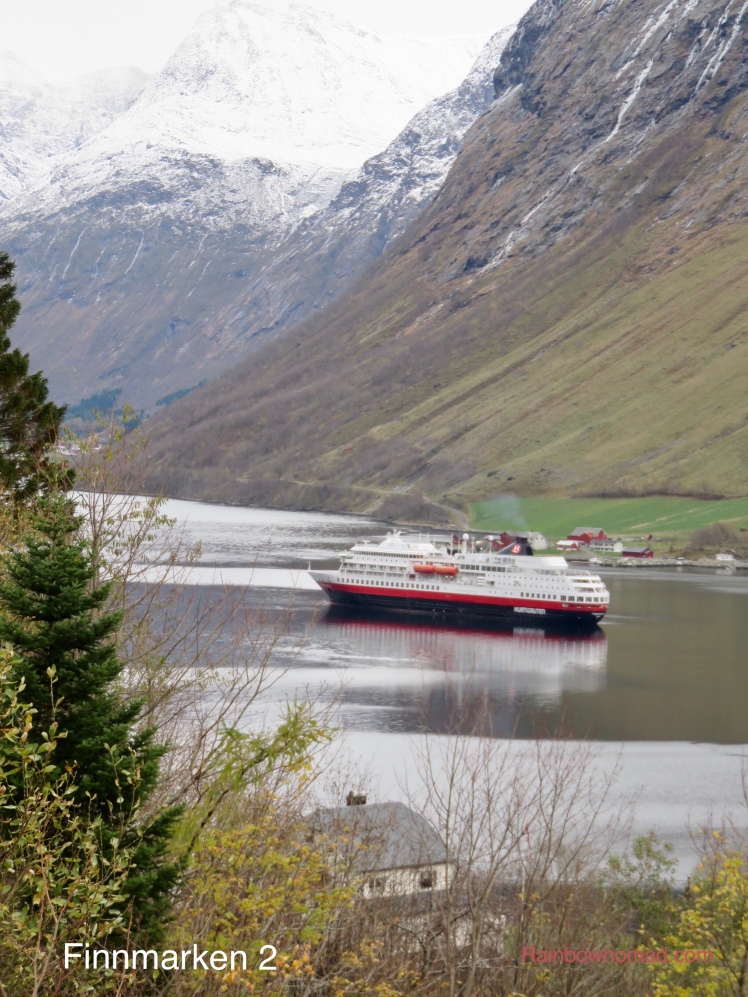 We left Bergen at night and realised through the evening as the ship docked at various destinations, that we were right above the propellor. Undeterred we had a reasonable night in our tiny cabin and at dawn watched the sun rise from the deck as we sailed into Ålesund. 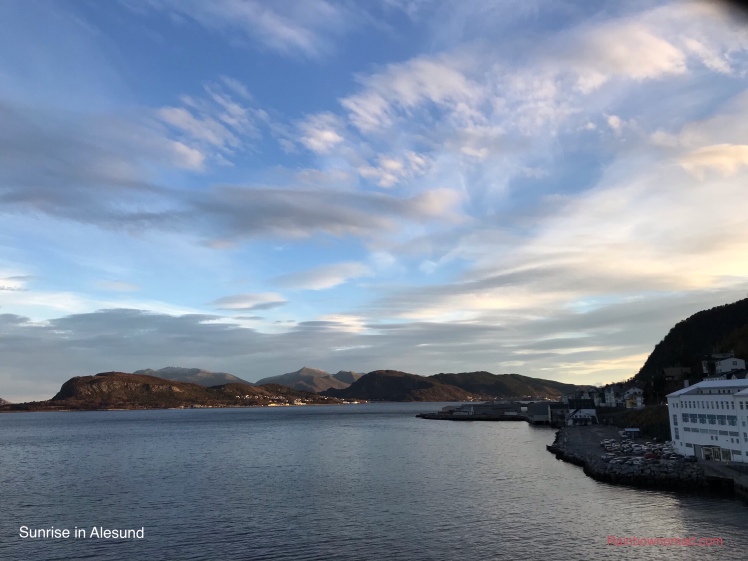 We did not disembark however, but continued into Hjorundfjorden and to the little township of Urke. Hjorundfjord is the site of the many legends surrounding King Olaf the Holy, who was killed in 1030, but more on him later. The little village of Urke up this fjord is home now to about 53 adults. We walked up the hill past several old farms and inspected the power station, sitting above a mountain stream. Later at the boat ramp waiting to return to the Finnmarken, we chatted to an older resident who said he wanted to visit Australia, the land of the healthy, wealthy and wise! 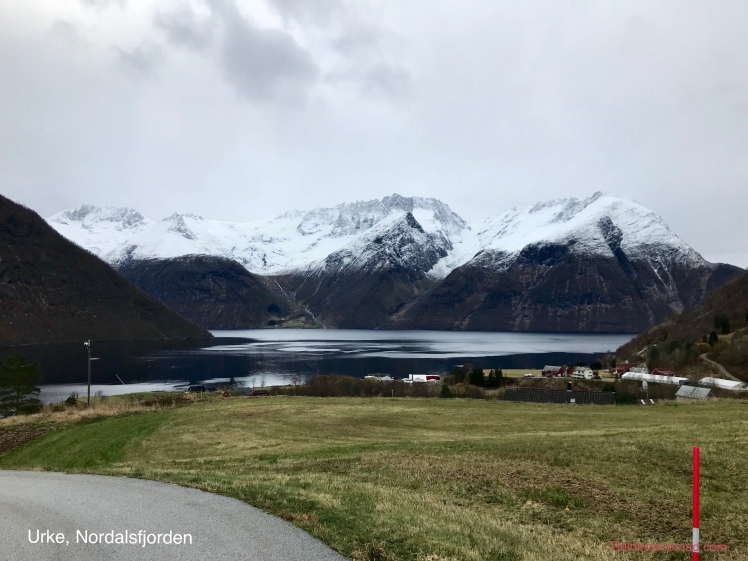 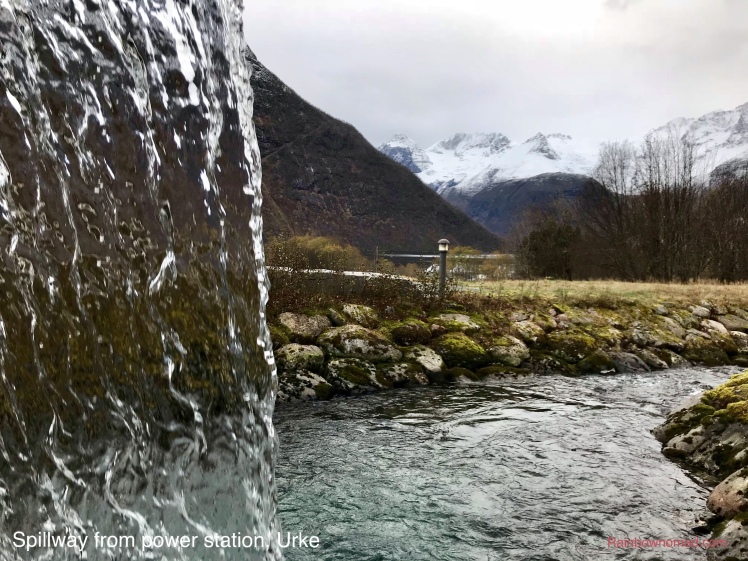 It was dark when we disembarked in Ålesund, a town completely destroyed by fire in the early 1900’s. Assistance with rebuilding the city, from Wilhelm the second, the German Kaiser, meant the town’s architecture features the Jugendstil or Art Noveau style. Nele, our Bentours guide, took us on a quick tour of the Kongengarten mall, named after the Kaiser. And we tried out night photography with our cameras set on Northern Lights settings, not very successfully. 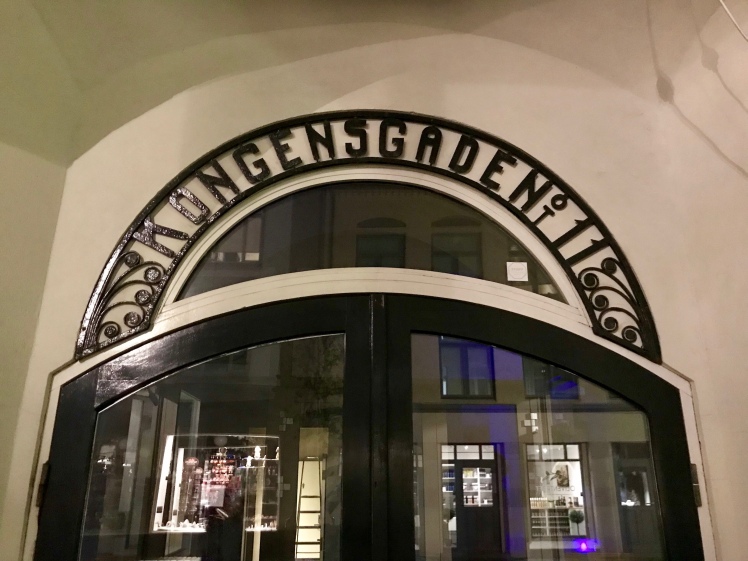 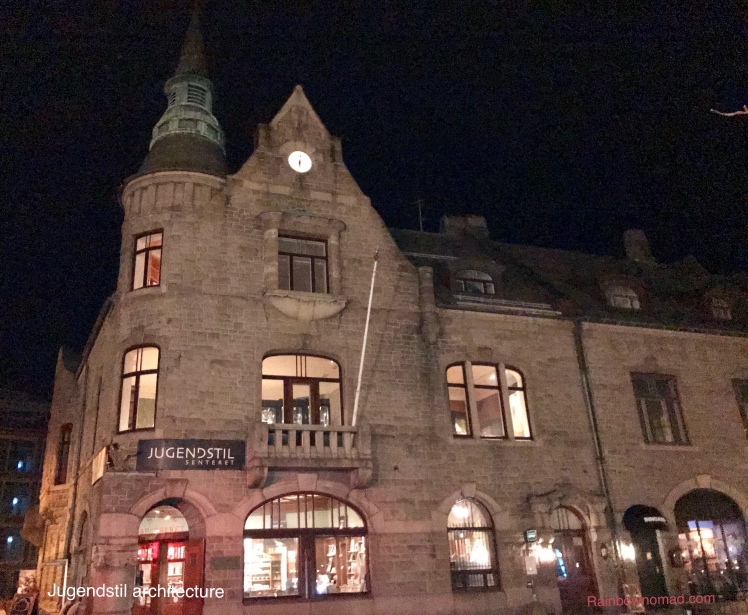 The next morning our stop was in Trondheim. It was raining. But that didn’t stop us enjoying our city tour. Our first destination was the Nidarosdom or cathedral. We learnt all about Olaf the Holy, who only became holy after he died. He was quite a brutal warrior while alive but he was the first Norwegian King to be converted to Christianity when he lived in England. Legend has it that he was killed in the battle of Stiklistad in 1030 and buried under the current cathedral. His sainthood dates from one year later when his body was dug up and those who touched it were healed. 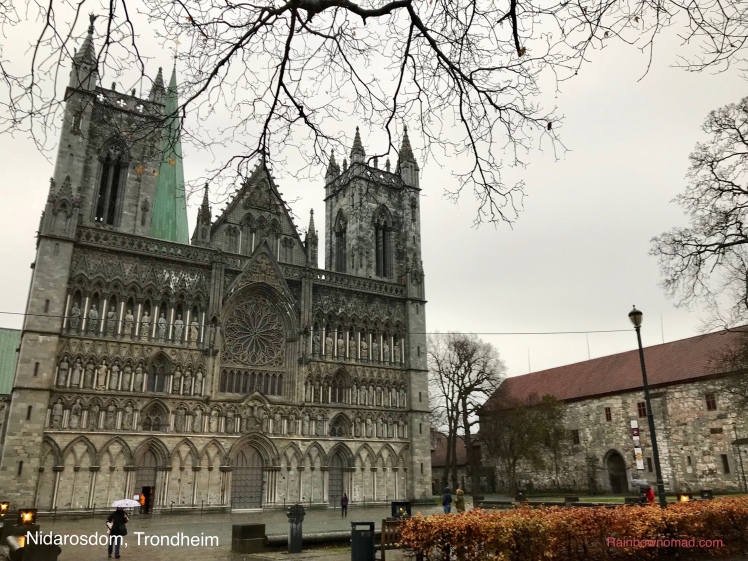 The cathedral is spectacular and later kings completed the huge construction above the original small stone church, in the 1300”s. Made from local soapstone the intricate carvings are beautiful. The stonemasons probably came from England and much of the cathedral’s architecture is inspired by English cathedrals built around the same time. 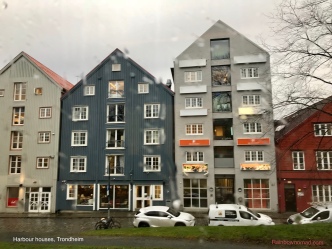 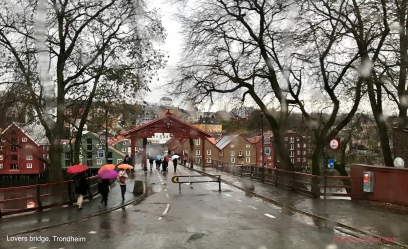 Trondheim has a large marine research centre and used to be a centre for ship building. It continues to be a major fishing centre in Norway. We continued our tour of Trondheim past the harbour, with its old warehouses converted into shops and offices, past the Trondheim University of Technology which is the largest university in Norway and up to a view point of the city. 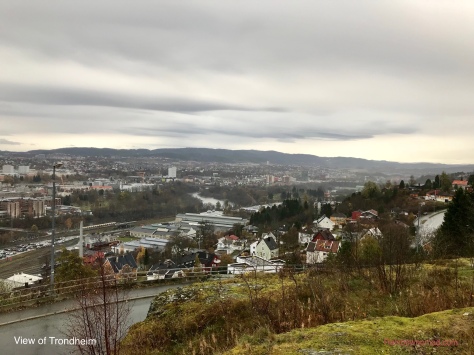 It was only after we rejoined the ship did we learn that two of our tour group had left the ship the previous night and misunderstanding the departure time, missed the ship. After a very expensive taxi ride, they rejoined the ship at 2am at the next stop. Apparently people missing the ship, happens all the time!