We slithered off the Hurtigruten ship onto the icy road where our bus was waiting. The Finnish people told us they hated the warm weather – zero degrees – because the snow melts and converts to ice, making the roads treacherous. Apparently early November should supply lots of snow and much colder temperatures. We donned our controversially purchased ice spikes – one of us insisting on this and the other suggesting it was a frivolous purchase. It wasn’t. 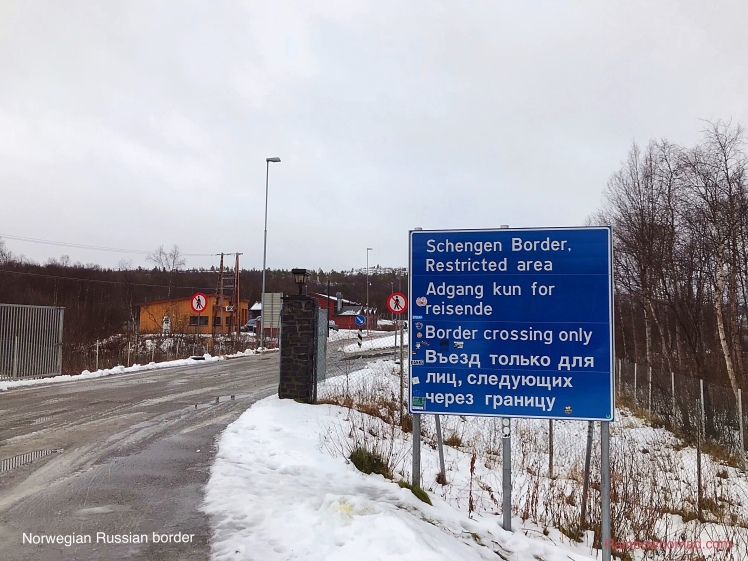 The border between Norway and Finland up north also includes a short section with Russia. We made a photo stop so we could experience a glimpse of Russian territory. We then continued down the Arctic highway, along the Karasjohka river towards Inari, where we stopped at the excellent Sami Museum.

We had learnt how in the 19th century the Sami people in Norway were forced to only learn Norwegian language and reject their traditional culture and religion. In the museum, we could understand the richness of that culture from the Finnish perspective, particularly their beautiful colourful handicrafts, embroidery and hand carved knife handles. Also the modernisation of transportation from the reindeer sled to snowmobiles. We passed the Sami people’s parliament building, Saamelaiskarajat, flying the fabulously colourful Sami flag in red, blue, yellow and green with a surrounding circle. 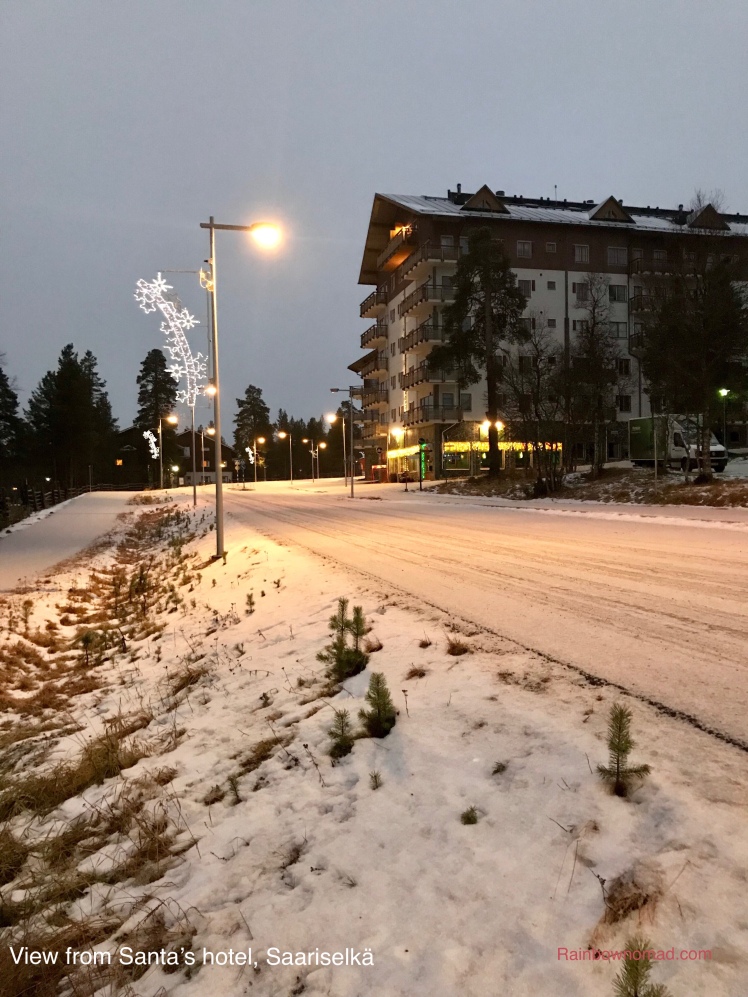 Our arrival in Saariselkä in darkness was highlighted by our hotel having saunas in every room – which of course we tried out. The next morning was foggy and we tramped down together to the local supermarket for extra snow spikes for those in our group who were sliding around on the icy footpaths. This morning we visited a working husky farm in Ivalo, a 20 minute ride up the highway. 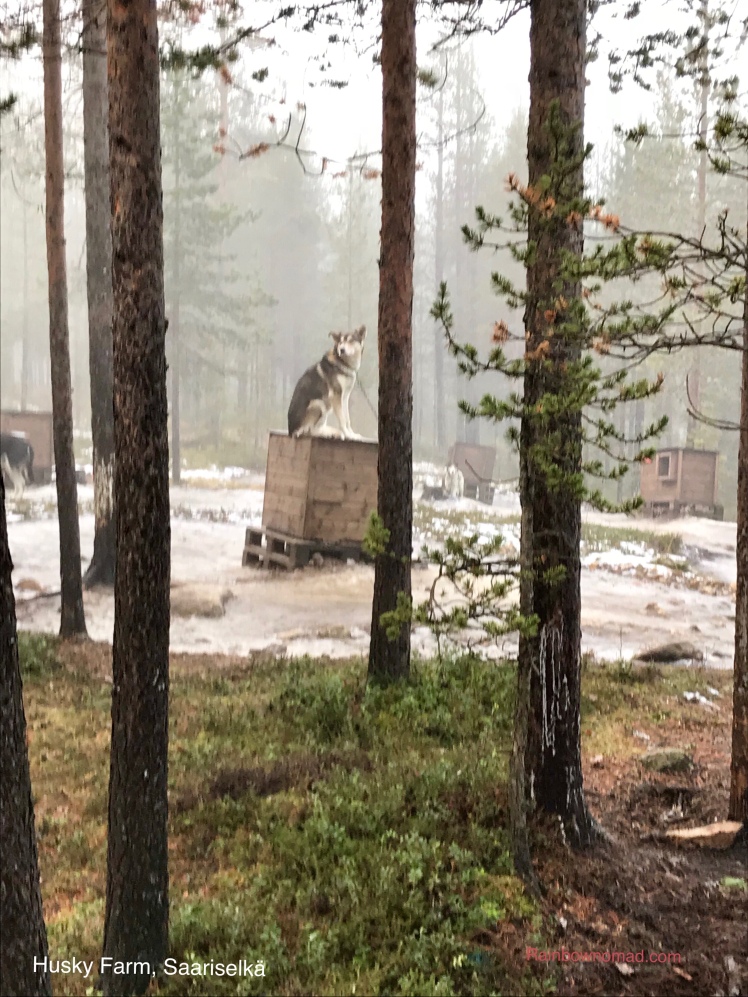 This farm bred Alaskan huskies, because they were better working dogs for sled pulling. Charlotte a musician from Bath, who now works as a dog trainer was our guide for the morning and introduced us to April, May and June, three adolescents who jumped all over us, even trying to return on the bus with us. While the dogs do sled racing, their main business is tourism and had we arrived later in December we could have driven our own sleds. We adjourned to a warm hut with open fire of birch logs and were served coffee, tea, hot berry juice and cloudberry schnapps. Charlotte brought a four week old puppy for us to cuddle. 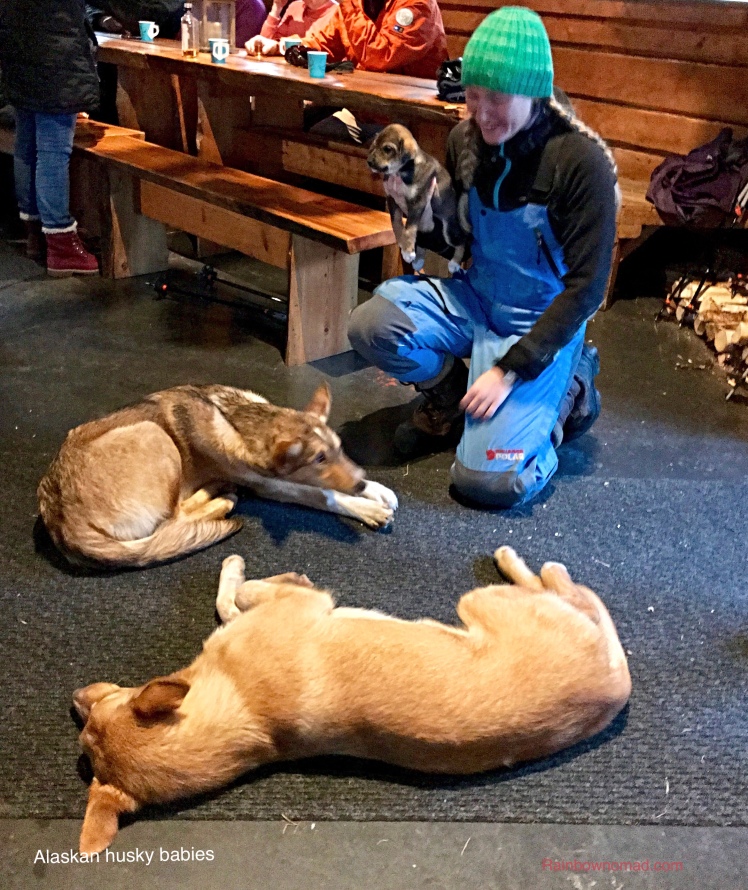 We returned to Saariselkä for lunch in a type of Sami teepee restaurant – reindeer stew and blueberry mousse. The sky had cleared in the afternoon so we found the walking track for Aurora hut and set off crunching along with our ice spikes. Little birds followed us tamely. By 3pm, the sun was setting in a huge orange ball. The sky seemed to be on fire. 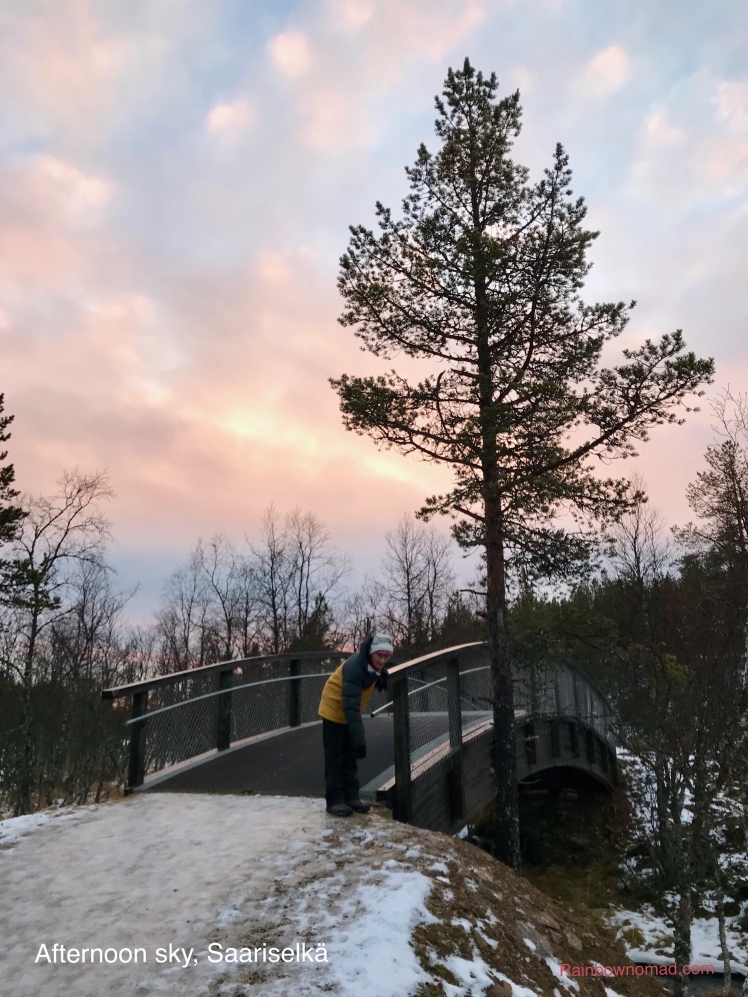 Next morning we again travelled south towards Napapiiri, where we crossed back over the Arctic Circle at Santa Claus’ village. Here we visited the post office where Santa sends his letters to good children, thousands of them, all over the world.