Well, we’re on the road again, this time to the Town of Seventeen – Seventy (1770) – only Australians know the significance of this date – and then to Lady Elliot Island. The first leg of this trip was Brisbane to Maryborough to stay with good friend Sue, electrical engineer/electrician apprentice for Queensland Rail. Taking the wandering route through Brisbane’s northern corridor, the Sandford valley, we headed through increasingly rural landscapes, up into the hills of Woodford and Maleny. Woodford is known for its wonderful folk festival, held at the end of December. Maleny, famously held out in protest of a large Woolworths store replacing its locally owned supermarket – vainly as it turned out. Both towns have a decidedly hippy flavour.

We stopped in Woodford for our first coffee break and witnessed the local disability group having a drumming workshop outside the community hall. We zipped through Maleny but had our second coffee stop at Kenilworth, heart of dairying country and our stop in the Town Park happened to be right next to the Kenilworth Farm Produce store outside the dairy cooperative. Some Kenilworth Ash Brie and Kenilworth Smoked Cheddar were definitely worth purchasing. 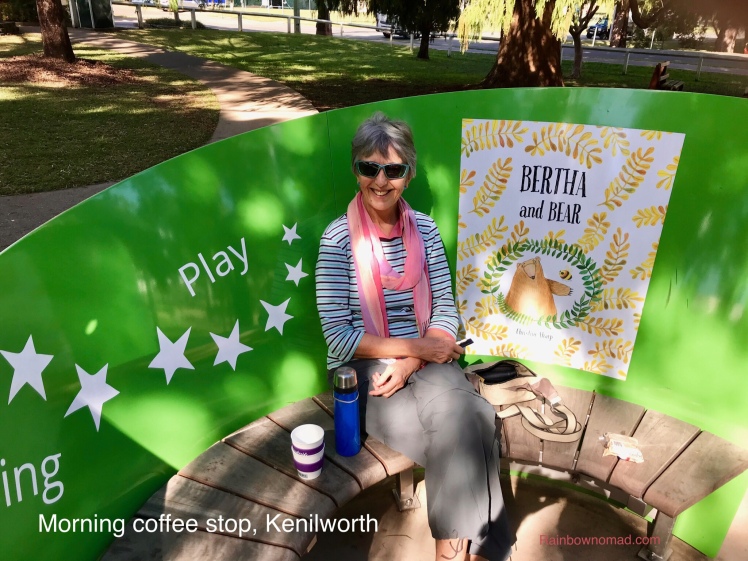 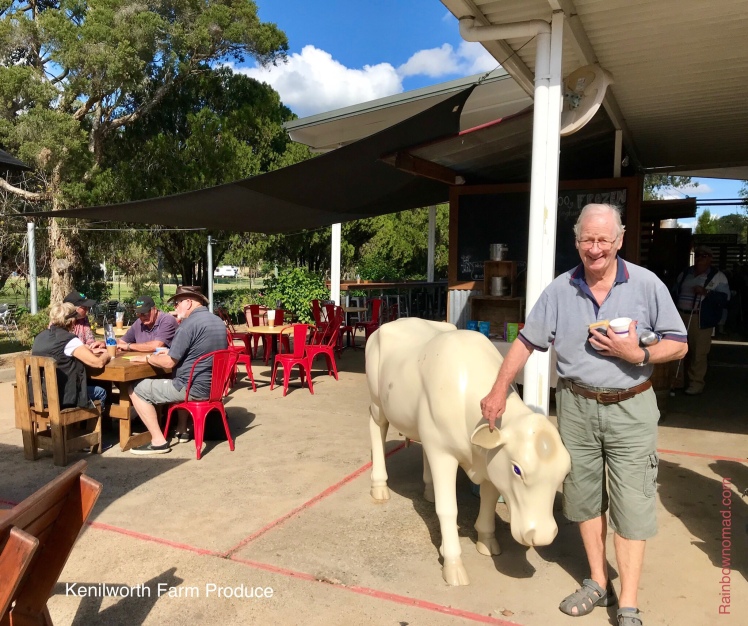 We continued on the Gympie Food Trail, past Imbil, Kandanga and Amamour, all renowned for their cheese and fruit. Our meandering took us along the Mary Valley Way and the Mary River Valley. It is certainly a very verdant place. In 2006, well meaning Queensland Premier, Anna Bligh wanted to build a dam on the Mary River, to try and resolve the water crisis facing Brisbane, the Sunshine and Gold Coasts. Fortunately a rare fish and the 2011 Brisbane flood put an end to that!

Lunch stop was Gympie and we just happened to park outside Emilia’s cafe – a wonderful Art Deco place, with pressed metal ceilings, fringe shaded lamps and metal advertisements for Vespa motor scooters, Guzzi motorcycles and varieties of pasta. We asked the Italian accented waitress, a mature woman, if she was Emilia but alas, no, Emilia was Giovanni’s mother and both had now passed on. We enjoyed a crisp prosciutto and goats cheese, as well as a haloumi and roast vegetable gourmet panini. Getting lost exiting Gympie had us zoom past the Institute of Country Music, obviously the headquarters of the famous Gympie Muster and bootscooting capital of Queensland.

Our final destination was Maryborough, a large country town at the mouth of the Mary River. Here in the 1880’s, over 154 ships deposited 22,000 migrants – no doubt to help conquer the sugar cane harvests and other rural pursuits. The local indigenous people had corroborees at the Ululah Lagoon, where we stretched our legs at sunset in preparation for a roast pork – and crackling! – dinner prepared by the wonderful Sue. 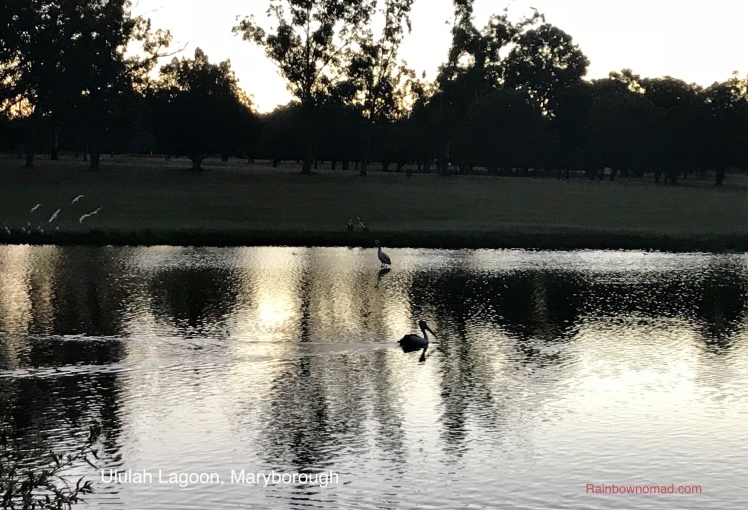 We sampled some of her extensive wine cellar too! Sue encouraged us to explore downtown Maryborough. The town celebrates an annual Mary Poppins event at the end of June each year. 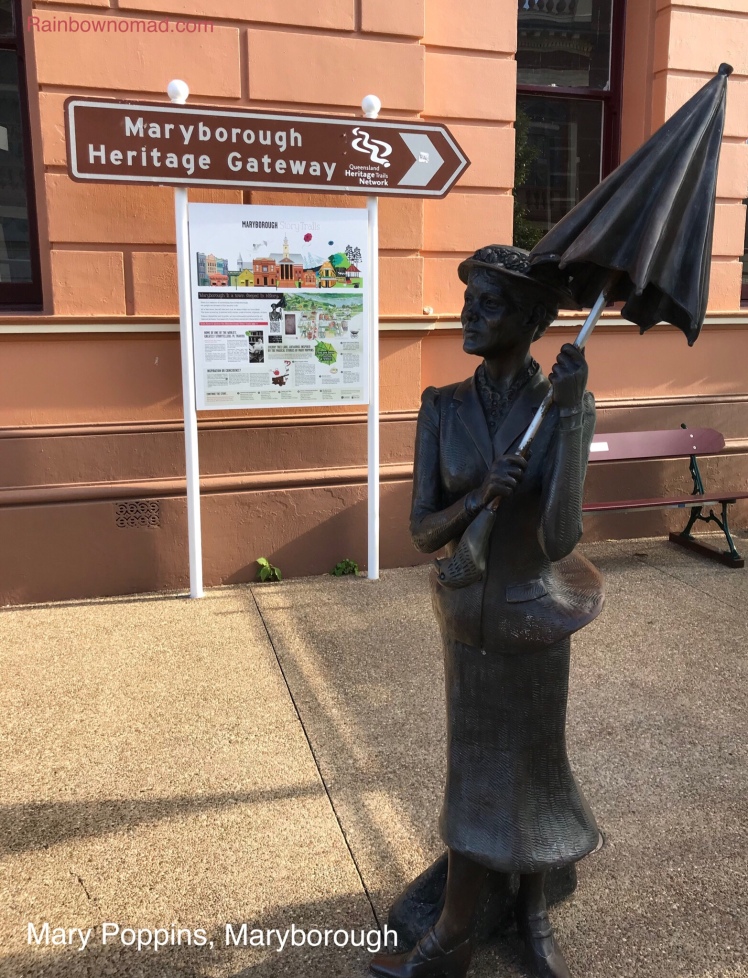 Miss P L Travers wrote her book called Mary Poppins, based on her own life in the early 1900’s and of course we had to find Mary’s statue. Miss Travers, if the movie ‘Saving Mr Banks’ is believed, would be horrified to see the commercialisation of her story in Maryborough. But – now, thanks to Mr Disney of course, everyone of a certain age KNOWS it. Tripping along the Heritage precinct humming Chimcheree and Supercalifragelistic, what did we come across but Mary herself – and there she was putting up her umbrella to cross at the street lights. We even tried some delicious scones in the Spoonful of Sugar cafe next to the old Bond Store and Customs House.

Opposite the Maryborough Heritage and Family History Centre was a strange contraption called a Magic Matchmaking Machine, designed to match up young immigrant women with local bachelor farmers. 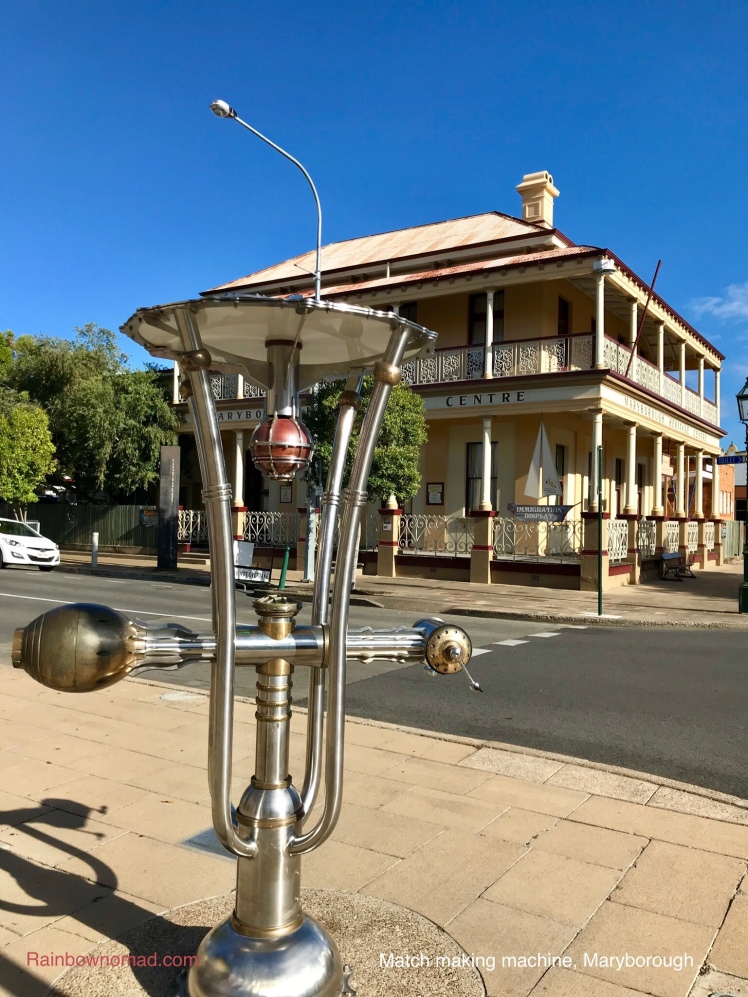 On the footpath were plaques commemorating famous Maryborough-ites. I particularly like the one above. I have no idea who she is but somehow she personifies the Maryborough spirit.