A road trip to the Central West of NSW in January requires fortitude. Our destination – Wellington, near Dubbo – averaged temperatures of 40+ degrees Celsius in the week before our departure. We set off from the coastal breeze of northern NSW, where the humidity was 89%, even though the temperatures were in the low 30’s, and travelled west through Lismore and Casino. Our first stop, after climbing the Great Dividing Range, was Tenterfield, where you enter the town via a long avenue of oak trees. In January, these majestic trees are in dark green leaf but come autumn provide a riot of red, orange and gold colour. This was to be our coffee break.

Tenterfield was the site of Henry Parkes’ famous Federation oration on 24 October, 1889 outlining the need for a Federation of Australian States. Parkes at the time was premier of NSW and gave his speech in the Tenterfield School of Arts. Travelling along the Main Street, we came to the first intersection featuring the old Post Office on one corner and the School of Arts on the other. 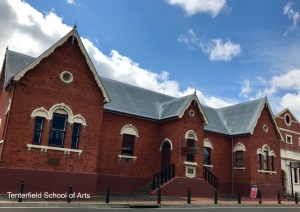 A monument to Edward Whereatt stands outside the Post Office, a magnificent Edwardian building from 1908. Whereatt was mayor of Tenterfield and recently elected to the NSW parliament, he famously gave up his constituency to Parkes. Obviously a generous man, he also organised the banquet where Parkes made his celebrated speech. Along from these buildings is the Tenterfield Saddlery, where George Woolnough worked. Woolnough was Peter Allen’s (Woolnough) grandfather and Allen, singer and one time husband of Liza Minelli made the town and saddlery famous in the wistful song Tenterfield Saddler.

After our coffee break in the park, we headed south to Glen Innes, heart of Celtic Country, which even sports its own Standing Stones and an annual hurling competition. Turning west, our lunch stop was on the McIntyre River at Inverell. Inverell is known as Sapphire City and at one time was renowned for its gemstones. It has a proud Scottish heritage, too and a Bicentennial Memorial describing the history of settlement, from the earliest Indigenous people to the current settlers. We ate our picnic lunch in the Memorial park enjoying the ascetic of the spare Scottish Memorial and the Presbyterian Church nearby.

The temperature as we turned south west from Inverell and down off the mountain plateau, began to climb. At Bingara at 1.30 it was 31 and as we crossed height of the Mt Kaputar National Park it was 39 degrees. We heard the helicopter before we saw the telltale column of smoke and realised it was water bombing a fire high up in the range of the park. The heat shimmered off the road shoulder as we stopped to capture the strange rock formations of volcanic plugs, dykes and lava flows that make up the ancient volcanic eruptions of the Nandewar Range.

The large town of Narrabri on the Namoi River has the reputation of Australia’s sportiest town! Certainly the aquatic centre looked very inviting as the temperature hit 40 degrees. Topping up our provisions at the local supermarket with fillet steak and a South Australian Pinot Gris, we set off to find our accommodation at Eulah, about 12km south east of Narrabri. It was at this point that our GPS began behaving strangely and had us heading back into the National Park, over dry creek beds and generally heading around in circles. Was this some mad geodesic plan the ancient land had devised to play tricks on us? The phone reception was non existent about 6km out of town. Eventually we found our destination Riverside Farm Retreat and were greeted by Meredith our hostess, who welcomed us to a huge spacious verandah and our air-conditioned accommodation – the wide and surprisingly fast flowing Namoi within a stone’s throw of the house. It was not long before we were immersed in the slightly muddy but deliciously cool water. 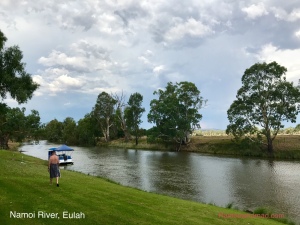 Rumblings in the distance suggested a storm was heading our way. Meredith informed us that she bred horses as well as running a business ‘in town’ as well as the Retreat. The paddocks were bare and they were hand feeding the horses, having had no rain for two months. Suddenly the black clouds began to deposit some fat raindrops and the wind whipped up cushions and blinds. The full force of thunder and lightning came crashing around us as the heavens opened up. The rain pounding the hard soil smelt – the steaming earthy smell of tropical downpours – and the temperature plummeted. 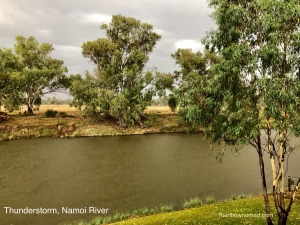 The next morning we woke to the sound of kookaburras laughing, followed by the screech of corellas rejoicing in the nectar released by the overnight rain – 34 mls! Sunrise in the cool dawn was spectacular and we headed down to feed the Clydesdales waiting by the House paddock, still soaked from the evening rain. The panorama of the central western plains after the refreshening rain sparkled in the morning light. What a fitting start to Australia Day. 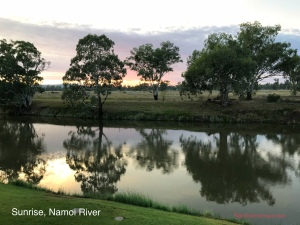 One thought on “Road trip to Central West NSW – Day 1”