Our plan was to fly from Christchurch to Auckland on 23 September but one week beforehand, a Kauri digger – a bulldozer harvesting the unique Kauri timber – ruptured the main fuel pipeline from Marsden Point near Whangarei to Auckland airport. Calls to our cousins in Auckland prompted us to listen carefully to local news reports and download the AirNZ app. We heard numerous reports of flights being cancelled, aircraft being diverted to Wellington or Sydney and hundreds of passengers stranded. An escort was arranged to transport the fuel 150km from the refinery at Ruakaka to Auckland by road. However, by the time we were ready to fly and given that we were flying out of Christchurch, there was no problem at all. We winged over the Alps arriving at midday and were met by cousin, Judy.

That day, New Zealanders were going to the polls to elect their national government and as Col was on duty at one of the polling booths we waited till late in the evening to hear the preliminary reports. Even at 8pm it looked like New Zealand was heading for a hung parliament with the mercurial Winston Peters holding the balance of power. Even after we left, the results were not in.

Our time with the cousins and extended family was warm and very social, enjoying visits to Mt Wellington, Devonport and meals eaten in and out. We two took ourselves off to the CBD to explore Mt Albert, with its garden clock and statue of Queen Victoria and the Auckland Art Gallery in its grounds.

Walking back to the harbour, we found the interesting Britomart Heritage development. This 6.5 hectare waterfront precinct celebrates New Zealand’s mercantile history and is a mix of warehouse restaurants, bars, boutiques, offices and services. We watched as a hopeful tried to dislodge a Stihl chain saw out of a stump, watched on by Stihl employees, willing to give the saw to anyone who was successful.

Along the way we found Amano’s bakery and restaurant and sloped inside for a herbal tea, hot chocolate and a pastry or two. Returning home via the ferry to Birkenhead finished off a great excursion.

After bidding the cousins goodbye, we moved on the Whenuapai (pronounced Fenu -a- pie or Vanilla Pie – my dear man’s attempt at Maori language) and our sometime Australian neighbour, Lyndal’s hobby farm. Whenuapai is on the north western edge of Auckland harbour and is now rapidly reclaiming farming land for residential blocks. It is also a grape growing area and as it was raining, Lyndal took us out for a late afternoon sample of Auckland wine to The Hunting Lodge, a reception venue and winery. We then adjourned to her son’s property near Helensville, where we promptly had a flat tyre!

Undeterred, we four managed to replace the damaged tyre with the spare and off we went into the night to rescue the lamb roast Lyndal had put on the slow cooker. Lyndal has sheep in the back paddock and told us how the incredibly wet winter had seen lambs birthed into water in June, followed by very cold weather. Normally ewes have twin lambs but occasionally they birth triplets and one of these runts was hand raised by Lyndal and named Lamb Chop – because as a male, that was what he was destined to become. We took the slops up to the sheep the next morning, and calling ‘Lamb Chop, Lamb Chop’, had the little lamb running ahead of the flock, baaing away and nestling its woolly head among our legs looking for its bottle of milk. Of course, it had been weaned but was still exceedingly cute.

Our next excursion was to the Muriwai gannet colony on the coast. About 1200 pairs of gannet and tern nest on the rocky ledges from August to March each year, as the Tasman Sea crashes in on the rock platforms below.

These 2.5kg birds have a wingspan of 2 metres and they nest within a wingtip of each other. Pretty tight. Each pair have one chick and they take turns on the nest. The chicks hatch naked and within a week have fluffy down. Once they fledge and jump off the cliff, they fly as far as southern Australia where they may be away for 4-7 years before returning to their birthplace to breed – only if they survive! 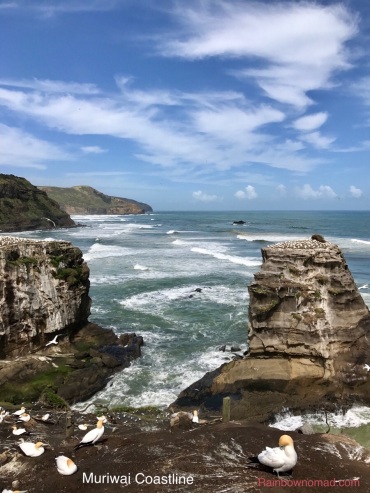 We watched the adult pairs building nests and courting each other, going through a rather elaborate kissing dance. Every now and then one would wheel off into the updraft and go looking along the coast for a tuft of flax to make their nests on the bare rock. 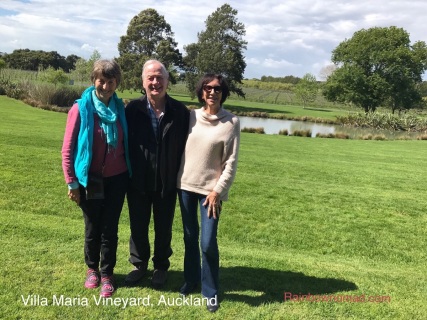 On our final day, we had lunch at the Villa Maria vineyard, within a stone’s throw of Auckland airport. Entering the vineyard from the airport industrial estate was like being transported to the country. We drove up a sweeping path, planted with trees and rolling green grass, past a few vines and to the restaurant, where we shared a bottle of Villa Maria Single Vineyard Seddon Pinot Gris and a Winemakers Platter – a fantastic finale for a wonderful holiday. Thank you, New Zealand and New Zealanders.