Boating on Brunswick and exploring the rivers of northern NSW has been a longstanding family activity and the Brunswick River and its tributaries are perfect places to see wildlife. 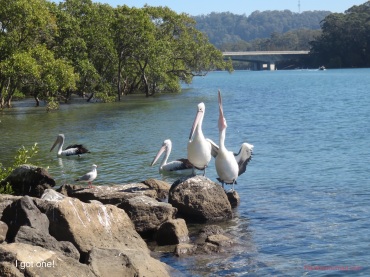 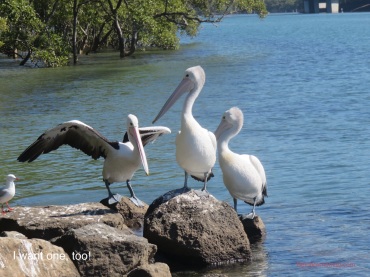 Our inflatable boats however have one small problem – eventually the rubberised fabric and seals perish. Our first was a Metzeler double hulled inflatable which the man of the house used for scuba diving. This wonderful orange boat took us up and down the Tweed River at Tumbulgum and Terranora lakes, as well as along Marshalls Creek, a tributary of the Brunswick River. It was during one of our outings powered by the electric motor that we realised one of the hulls was obviously leaking. The effort required to power a deflating boat was too much for the poor electric motor, which eventually failed. Fortunately, we were well organised enough to carry the hand pump but rowing along against the incoming tide was no fun and we had to stop every 200 metres to inflate the hull! We eventually made it back to load up the trailer.

We then reverted to carrying the outboard motor as a backup. The photo above shows all methods of power in operation. Running up Marshalls Creek requires a good understanding of the tides. The incoming tide can create a strong push up the narrow entrance into the artificial lakes of north Ocean Shores. A few times we have ventured up and misjudged the tide, and, with a failing electric motor, have had to row like Olympic champions. Eventually we invested in a new inflatable – this time a Zodiac. Its christening in Marshalls Creek included taking my 82 year old mother on her inaugural inflatable boat experience, complete with borrowed tracksuit and cap.

The Brunswick River, along with Marshalls Creek, arises in the Mount Jerusalem National Park part of the Border Ranges. It meanders its way through Main Arm and Mullumbimby, entering the sea at Brunswick Heads. The bar where the river meets the ocean is renowned as a dangerous crossing but on the occasions we have been out whale watching it all looks quite docile and we can wave to the fisher folk on the rock wall. 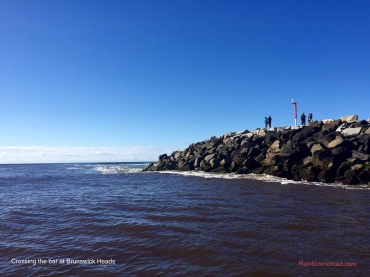 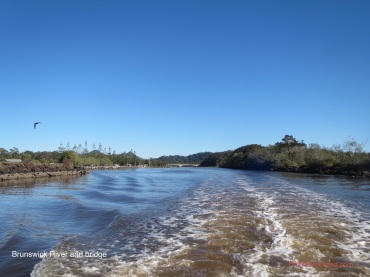 Whenever we are on the river, we focus on the bird and marine life. Rays, mullet and other estuarine fish are plentiful but the birdlife is spectacular and we have sighted jabiru and endangered pied oystercatchers in the small bird sanctuary behind the oyster leases. 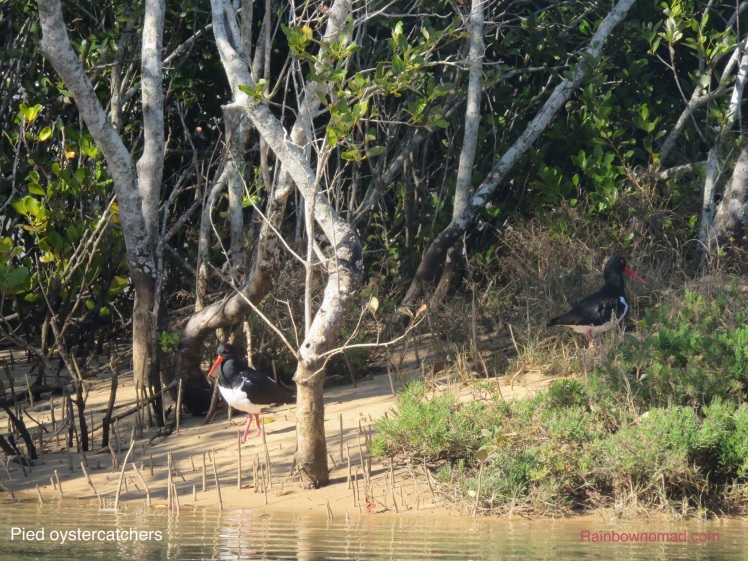 The marina at Brunswick Heads shelters working fishing boats, touring yachts and sightseeing craft, including the whale watching boat. Every May there is a Brunswick to Mullumbimby paddle fund raiser. All sorts of craft get involved including kayaks, paddle boards and canoes.

One year, we decided to do a trail run, with two 15 year old passengers, that is four of us in the boat. Well, this obviously proved too much for the poor old battery and about half way to Mullumbimby our electric motor quietly died. As the car was in Mullumbimby we had to continue on by oar. This was only about 3 kilometres but the rowing skills in the boat varied considerably and could only be coordinated by singing endless rounds of ‘Row, Row, Row Your Boat’!

We were reminded of this occasion last week. We used to transport the boats on our ancient trailer, however  organic garden mulch and the dripping saltwater from the boats over time finally rusted out the bottom, so we now transport the boat on the roof rack of the car.  As age has crept up on us, lifting the boat onto the roof rack has become quite an ordeal! Our usual method was to lean the boat on the back of the hatchback and lever it up onto the roof rack, the car taking the weight of the boat. But our brand new Subaru has a lip protruding over the back window – a new design feature! So the man of the house decided this might break off and we should lift the boat sideways up onto the roof rack. This involved taking the full weight of the boat on uplifted arms. Well, pilates has done wonders for my upper body strength but this was no joke. Of course the boat slipped off onto my head, wrenching branches off the shrubs bordering the driveway, to the sound of ‘Hold it! Hold it!’ On the second attempt we finally managed to succeed and set off to the boat ramp at Brunswick Heads. 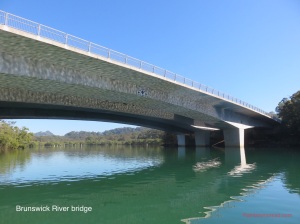 Everything went smoothly. We unloaded the boat, admiring our feathered friends waiting for fish and powered – with the reliable outboard – under the bridge and past the oyster leases and the caravan park.

We detoured around the little island where the birds rest and on we ventured about half way up the river to Mullumbimby when suddenly the motor died again! In fact, the engine was so hot, it was smoking. I had visions of the whole thing catching on fire!

It was a beautiful day but it was getting hot and the thought of rowing the 3 kilometres back to the boat landing did not really appeal. However, knowing it had been done before, we rowed into the bank and considered hiking back. The bush looked quite impenetrable.

Of course, the man of the house, being super organised had brought along the petrol can in a bucket – the same one that used to carry the battery for the electric motor! We tried numerous attempts at re-starting the motor, once the cover had come off and it had cooled down a little but to no avail. So plan B involved filling the petrol tank with fresh fuel as we rocked along in the middle of the river. Again, I had visions of us blowing up! Another attempt at starting the motor and it leapt into life with a few spurts and off we went – zooming all the way back to the landing! As a retired couple, you are very aware of looking either like you don’t know what you are doing or alternatively ridiculous, so we tried another Herculean attempt at the sideways loading of the boat onto the car. When we arrived home, the man of the house suggested we try a contraption called Rack ‘n Roll to assist us next time in getting the boat onto the roof rack more easily. The ongoing refrain in our family is ‘Never give up’ and so, as I went inside to make a cup of tea, ended another Adventure in Paradise. 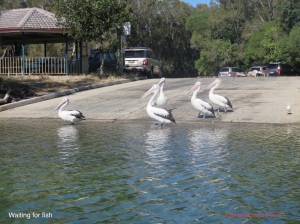 One thought on “Boating on Brunswick”