Exiting Haneda airport at 5.30am is a good way to begin using the Tokyo metro. Our mother and daughter trip was about to unfold, with instructions on what to do if we got separated on the notorious trains, where passengers are pushed on – or off! We had little to worry about – the platform was almost deserted. The tech savvy young one rolled her eyes when I insisted on asking for a physical map of the metro but undeterred we arrived at Shinjuku main station. Using the lockers involved being given loud instructions from an unknown source, which kept being repeated when we were too slow to get our large backpacks jammed in. Finally unemcumbered, we set off into the early morning haze of downtown Tokyo.

Our first stop was a 7- Eleven store whose ATM miraculously accepted our credit cards and gave us thousands of Yen. Doing the mental arithmetic conversions on only a few hours sleep was our next hurdle, as we tried to select some breakfast snacks. We subsequently learnt that these little convenience stores are where one shops! No big supermarkets- everything is beautifully and efficiently packaged. As we could not check into our accommodation till 3pm, we thought a park would be a great place to rest our weary bones. 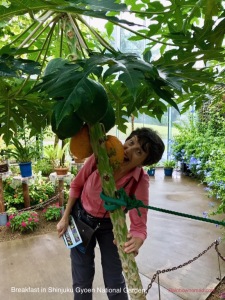 Shinjuku park has a greenhouse with exotic plants like papaya, orchids and cycads – not so exotic for us – as well as a French rose garden, traditional Japanese garden and tea house. At the tea house, we paid our 700¥ and went in, bowing to the kimono clad hostess. She offered us a small green tea flavoured sugar snack and a bowl of green cloudy tea, which we politely drank!

We spent several hours in this peaceful shady place under enormous ginkgo and maple trees. 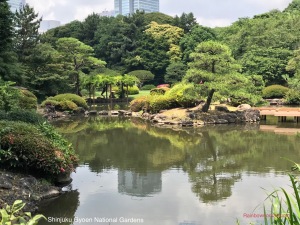 Our Airbnb apartment in Shinjuku Gyoen Chome (Shinjuku Garden District) was huge by Japanese standards with separate bedroom, living room with pull out bed, a bath house and bathroom, kitchen with all appliances. Fortunately for me, I had already experienced the Korean/Japanese bathhouse routine in the Hotel Diana, Woolloongabba. I knew all about squatting on the little stool while scrubbing your skin with gritty mud-like soap and washing it all off with the extendable shower hose. The whole room is devoted to washing and splashing around and has a slightly mouldy aroma. In our apartment, it’s entered through the bathroom with its sink and throne-like toilet. We are yet to activate the heated seat but heated toilet seats are commonly found in public areas.

Finally we found a wonderful local restaurant specialising in fish, where we had sushi, octopus and sashimi – a feast. We could not read anything on the menu and even holding our phones with Google Translator over the text did not prepare us for the portion sizes. The waitress delightfully recommended different dishes and told us of her daughter studying engineering in Sydney. A great first day experience. 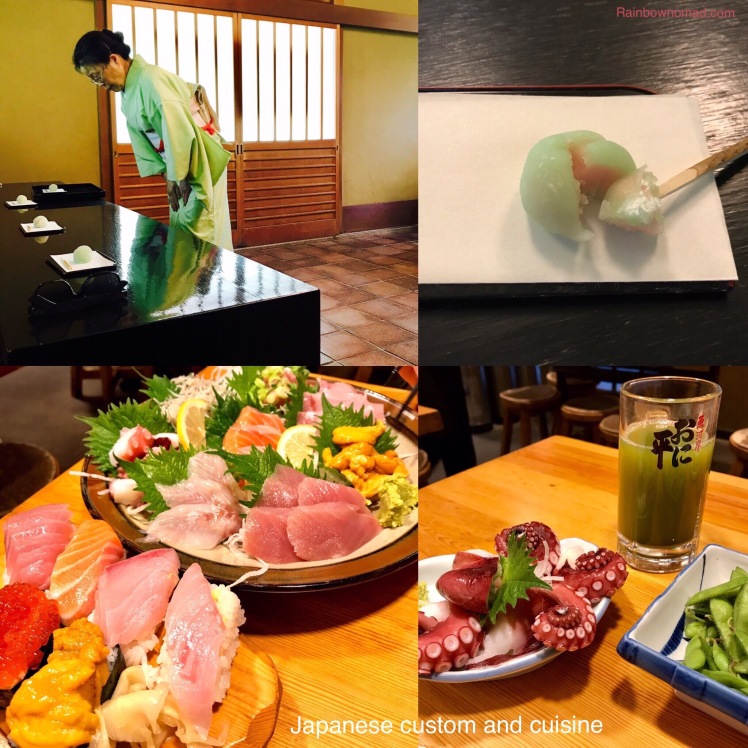 5 thoughts on “Tourists in Tokyo ”