What better reason for a costal road trip than attending a 3rd birthday party in Port Macquarie! We set off south from Ocean Shores, with bikes loaded on the back of the car. The best thing about a coastal trip is crossing the mighty rivers, which pour out into the Pacific Ocean. The Brunswick, our familiar local river was the first but it pales into insignificance compared to the Richmond and the Clarence. The Richmond enters the sea at Ballina and the Ballina bar is infamous as a trap for small water craft. We stood at the entrance and were nearly blown away. 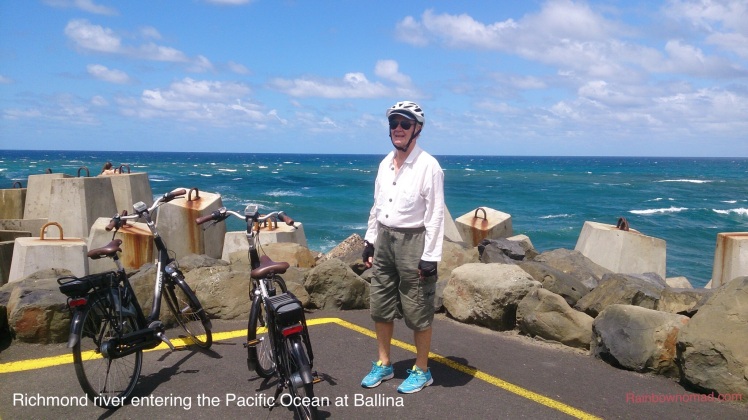 Heading south, we crossed the Richmond river at Wardell and continued past historic Woodburn, just near the New Italy settlement. Apparently the first Australian refugees settled here in 1880. Italian migrants from Veneto were lured to a non-existent kingdom on the Bismarck Archipeligo in New Guinea, only to find no settlement and starvation conditions. The then premier of New South Wales, Henry Parkes offered to rescue them and they were settled in an inhospitable stretch of forest behind Woodburn, where the industrious Italians started a dairy farm and vineyards. Travellers can stop by and view their museum and have a cup of Italian coffee.

Close to the Richmond is the Clarence River, which enters the sea at Yamba. Both these rivers are 394 kilometres long and were named after English Dukes in the early 1800’s. My great-grandfather and two of his brothers were named after the east coast rivers. What was my great, great-grandmother thinking when she named her sons, Brisbane Fitzroy, Clarence Macleay and Richmond Clyde, all names of coastal rivers. Perhaps she ran out of names given she had 11 children. Richmond remains an enduring name in our family!

We stopped in Yamba for lunch and watched the surf surge next to the breakwater. A number of retirees and holiday makers were swimming in the surf pool. 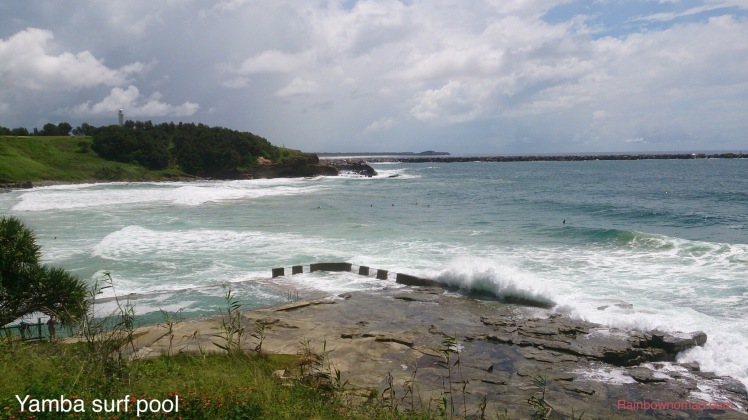 Later we drove to nearby Angourie. When I was last there in 1977, the Blue Pool was a hidden gem, enclosed in rainforest next to a camping ground, where we stayed and swam. The Blue Pool is now filled with green algae, with caution notices to avoid swimming, however the waves crashing in on the nearby rocks, gave us a blue feel. 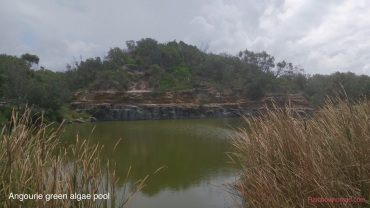 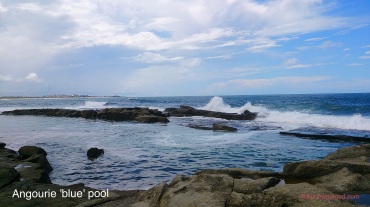 Our destination for the first evening was Scott’s Head but we had also considered Corindi on the coast, just north of Coffs Harbour and close to Red Rock. As we drove into Corindi, the local kids were disgorging from school. We stopped at the local store for a coffee while the young boys with skateboards flew around the skate park next to the Caravan Park. The Caravan Park offers a minimum of two nights accommodation and as we had only wanted one night we admired the coastline and headed on south. 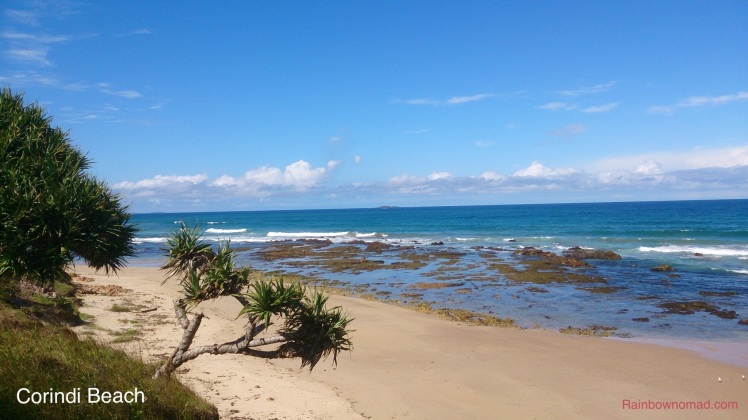 Over the Bellingen River at Nambucca Heads, we turned off for the 10 km into Scotts Head. This hamlet on the coast has a population of 821 and is 19 km south of Nambucca Heads and 54 km north east of Kempsey. What a gem! Our motel was perched on the hill entering the town and our balcony, faced north overlooking the headland the northern beach. 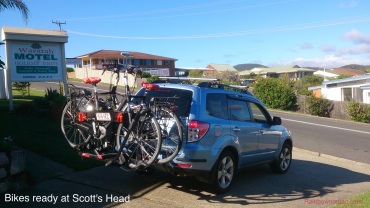 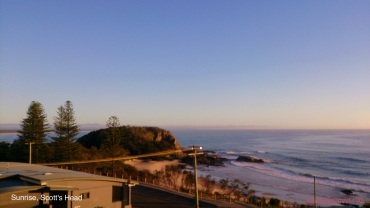 After a swim, we indulged in fish and chips with a bottle of pinot gris, at the fabulous little cafe on the corner of our street. All night we listened to the surf crashing on the rocks below.

Our journey continued on along the coast via South West Rocks, where the Macleay river enters the sea. The Macleay passes through Kempsey and the rich river delta between Kempsey and South West Rocks supports many dairy farms. In a previous visit to Port Macquarie in 2013, we were caught by the east coast low, which followed Cyclone Oswald and flooded the whole east coast of NSW. We were unable to drive home north and diverted south through Maitland and the New England Highway. We later heard of the devastation of the dairy industry along the Macleay. However on this trip, it all looked green and prosperous. South West Rocks is a thriving holiday and tourist town and we stopped to watch the locals doing tai chi and have a morning coffee. 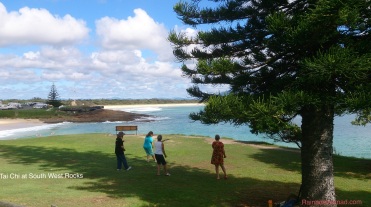 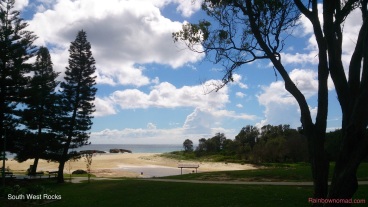 On the southern end of South West Rocks is a protected harbour, Trial Bay, named after the brig Trial which sank there in 1818. More infamously, there is a gaol perched on the headland overlooking the bay, which was opened in 1886, to house prisoners who were to construct a breakwater. 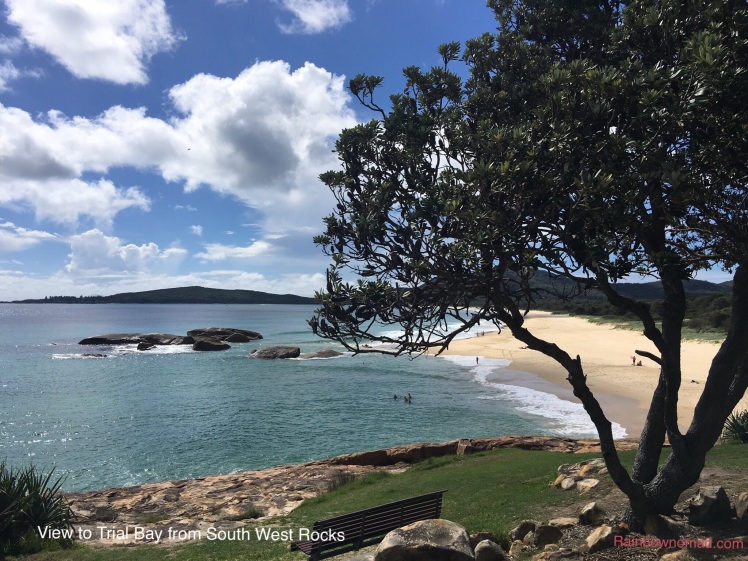 This proved too difficult and the gaol was abandoned until 1915, during World War 1, when it was reopened as an internment camp for enemy aliens! They were all men and were selected leaders of the German Australian community — including honorary consuls and pastors of the Lutheran Church, academics, businessmen and the destitute. Separated from their families for 3 years, these Australians of German heritage baked bread, published a local newspaper and held lectures and put on plays. A photographic exhibition of their pursuits and eventually their families’ visits was available in the museum, all taken by inmate and photographer, Paul Dubotzki. The gaol closed in 1918 and is now a historic site run by the National Parks. 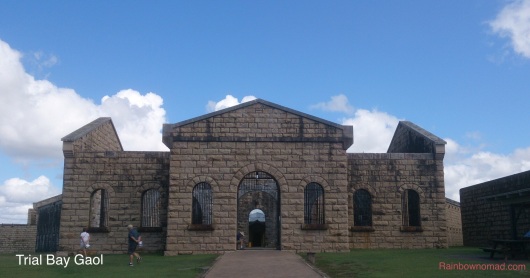 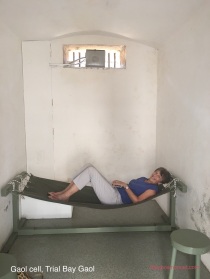 Our final destination was Port Macquarie, set on beautiful coastline and next to the Hastings River, famous for its oysters and other seafood. Our aim was to attend a birthday party but we also took in the famous beaches and the local koala hospital. Our journey was complete. 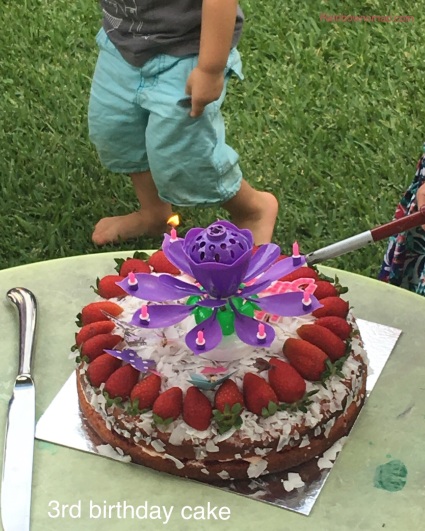 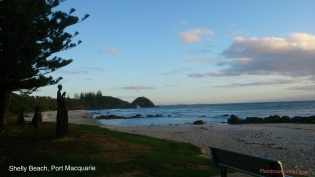 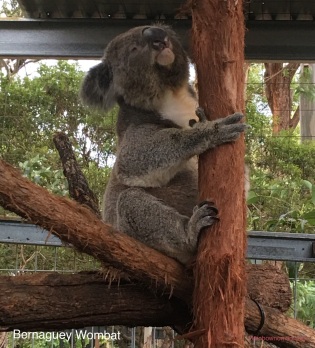