Visiting Ancient Angkor was a dream cherished from my travelling days of the 70’s. Our route from Prek k’Dam by coach was via Skun, the Tarantula centre of Cambodia, where one could buy KFC (Khmer Fried Crickets) – literally – arriving in the more salubrious outskirts of Siem Riep several hours later. But where were the temples?

We didn’t need to wait long as we were bundled off late in the afternoon to see the Bayon – the fabulous state temple with the Buddhist face towers. This temple complex was built between 12th and 13th centuries, during the reigns of Khmer kings, Jayavarman VII to VIII. Its complexity derives from having passed through several religious phases, from pagan Pantheon of the Gods to Hindu worship and Buddhism.

Entering by the Eastern Gallery or Gopura, we passed through two Guardian Lions and began to climb up into the tower galleries. Around the first level are carvings telling of the battles between Khmers and Chams. We had already experienced the temple construction used by the Chams at My Son, in Viet Nam, but the intricate carving of these sandstone friezes was spectacular. The Chams continued to battle with the Khmers, ultimately unsuccessfully.

We continued up into the towers coming face to face with giant carved Buddhas.

The construction of these temples leaves one in awe of the skills of the Khmer people from the 8th to the 13th centuries. The raw materials, mainly sandstone were cut from the Kulen Mountains some 200 km away. The stones were cut, holes drilled to insert wooden poles so they could be lifted and carried, then floated down river to Siem Riep. The bases and supports of the temples were constructed in laterite, a soft clay which becomes porous when dried. Above this sandstone and bricks form the outer areas.

Archways were formed by a corbelling technique, with each stone protruding slightly above the one below, forming a pointed arch. The temples were not destined to be places where large groups congregated to worship, so didn’t require the huge arch spans, being devised at the same time for the cathedrals of Europe, such as Chartres and Nôtre Dame. A type of vegetable latex was used instead of mortar to glue the stones or bricks together, with a seamless effect.

The intricately carved friezes showed dancing Asparas and Devatas. Asparas are female figures, their male counterpart, Gandharva, shown dancing on the freeze. The costumes and technique are still evident today and the influence has spread as far as Thailand, Malaysia and Indonesia. Devatas on the other hand, are female goddesses, often shown with their feet pointing in the same direction.

On our second day, we arose at 4.30am, to arrive at Angkor Wat at dawn and hopefully see  sunrise over the ancient temple. Excitedly, we expected to be some of the few to experience this but no! On arrival, we joined the throngs of tourists with various cameras, from phones to expensive devices with huge telephoto lenses and tripods. We were even offered refreshments while we waited and small children plied us with books about the temples. As the light began to brighten, a light mist of rain gently fell. There was to be no spectacular sunrise shots for any of us. It was however a magic display as the light reflected on the huge temple complex in the moat below.

The moat is ingeniously designed to support the weight of the sandstone structure, which floats above the water. The temple complex has been described as a pyramid of three levels, each one enclosed by a gallery with four gopuras and corner towers. The summit is crowned with 5 towers. The whole complex including the moat covers almost 200 hectares.

Along the first gallery is a sandstone frieze, which tells of the Hindu Ramayana and Mahabharata epics. Anjuna, head of the Pandava army must defeat the Kauravas in the Battle of Kurukshetra, shown below.We climbed up steep vertical stone steps to the central tower complex, meant to represent the holy My Meru.

Far below us, were the patient guides awaiting our return. 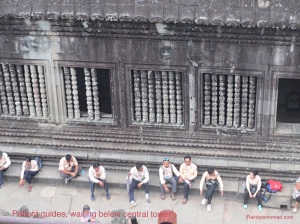 Further along we came across a statue of Buddha, surrounded by his 7 headed Naga, the snake and looked out over the moat, through intricately carved stone balustrades.

Our final visit was to Ta Prohm, famously featured in Lara Croft, Tomb Raider. The film was about the discovery of a diamond in an Egyptian tomb but of course, Ta Prohm is a Khmer temple in Cambodia. It is currently being restored by a team of Indian archeologists under the UNESCO umbrella. It was certainly the most remote temple we visited and the fabulous jungle enveloping the ruins gave it an exotic feel. Ta Prohm was also built in the 12-13th centuries and has been left in its ‘natural state’ to show what all the temples looked like when ‘discovered’ by Europeans in the 19th century. Our entry showed just how much degradation had taken place. We were told by our guide that the wall below had originally been  brightly coloured and some reddish tinge remains.

As we walked on, climbing over sandstone ruins, the giant silk-cotton trees (Cebia pentandra) with their pinkish roots and the familiar strangler figs had taken possession of all buildings.

We clambered through stone lintel doorways, wondering how safe it all was. The occasional crane and scaffold was in evidence, where reconstruction had begun. This didn’t stop our party having a little fun amongst the Devatas.

Siem Riep and the whole Angkor Wat complex is now almost loved to death. The number of tourists, even at dawn and late in the day, puts pressure on the local guides to hurry you through the ruins, perhaps with cursory explanations of the fabulous history of the ancient Khmer civilisation. Acres more jungle ruins, peppered with land mines still exist, a legacy of the recent wars. Cambodia still struggles to educate its mainly young, surviving population. Despite this, the legacy of the Khmer culture can be found in the serenity and grace of the people here. Namaste. 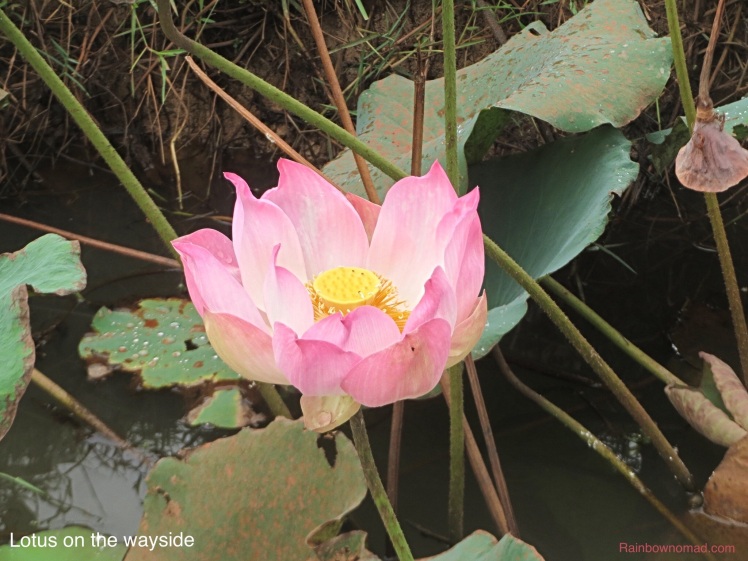