Seventh heaven in Saigon is when you get to make and eat the wonderful food promoted by Luke Nguyen. The reason we are here in this crazy city is to join the APT Luke Nguyen signature tour. We half expected Luke to make a brief appearance and then hand us over to our tour guide but no! On the first evening, he shook us all by the hand, calling us by name – we did have to wear name tags – and was as natural and charming in person as he is on TV. Off we went to eat a degustation menu in his brand new Grain restaurant and cooking school, with Luke as the Master Chef, preparing the dishes as we ate! 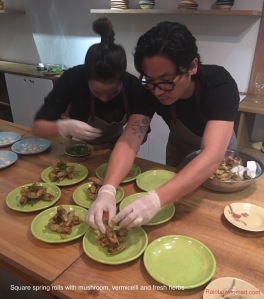 You enter the restaurant through the Grain marketplace, where the staff assist with fresh ingredients for the dishes which we prepared the following day. Our group of 30 were seated on long tables and provided with share platters of fabulous food. It wasn’t long before the room was full of chatter as we all got to know one another and indulged in a shared love of good food.

Luke was recently profiled on the Australian version of ‘Who Do You Think You Are?’ and was surprised to learn that his maternal grandfather had to leave China to settle in Viêt Nam in the early part of the 20th century. He also learnt that his father and paternal grandfather fought on opposite sides in the American War. His parents and older siblings escaped to a refugee camp in Thailand, where Luke was born, before the family settled in Cabramatta. We visited where the family lived in Yersin area of District 1 and quite incredibly met Luke’s parents and his Aunty, whose home we invaded. 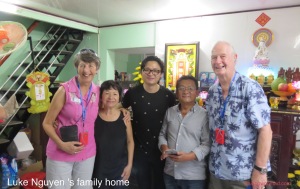 Luke happily announced that we could walk around in the tiny lanes which housed many families, going about their daily chores and providing small shopfronts for each other’s needs.

But back to Grain, where we were to begin our cooking class. Luke explained that he originally came to Viêt Nam to assist with a Masterchef series including a Young Masterchef but they could not find enough young children who could cook! So rather than open just another restaurant, he decided to run a restaurant/cooking school to promote the beautiful fresh and tasty local food. Despite being mostly of grandparent age, we were the first Australian tour to christen the restaurant, so along with Mum and Dad Nguyen we filed into our cooking stations. 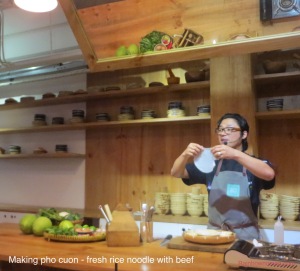 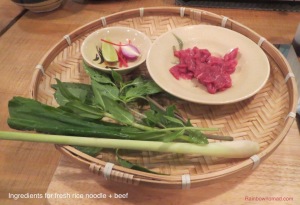 Our menu for lunch was pho cuon or fresh rice noodles with beef, marinated sea bass with green mango salad and coconut crème caramel with dragon fruit. We learnt about saw tooth coriander, perilla and rice paddy plant; how to buy the best fish sauce to make nuoc mam cham; and how to wrap fish in banana leaf so it won’t come undone and Mrs Nguyen showed us how to slice a green mango. There was lots of laughter and glee at how this wasn’t so difficult after all.

We left feeling we had had the most warm and celebratory meal – what sharing food is all about. 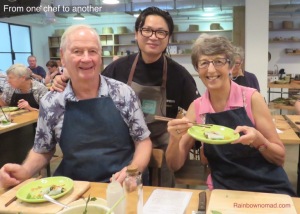