Sample – a Taste of Northern NSW – Bangalow Showgrounds are the perfect place on a spring Saturday to sample the region’s wonderful produce. Over 96 exhibitors had popped up their tents to tempt us to sample their wares. 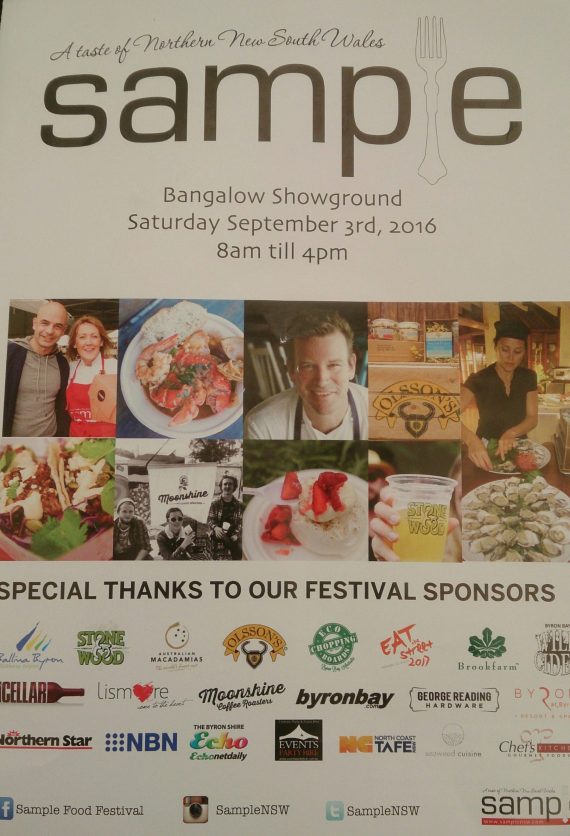 We wandered around the outer ring and found our favourite cheese maker – Debbie and her team from Cheese Loves You. We sampled some cultured butter but could not resist one of the cheese packs with Bluey, Little Aud, Mild Camembert and Romano, all sourced and made at the Allard Dairy in Burringbar. Further on was the Honeybee Wraps stand. These wraps are made from organic beeswax and are perfect to wrap runny camembert.

It was a windy, blustery day. We passed Illios the Greek, Stone and Wood beer and cider, Pure Melt Chocolate and Koobideh Persian food but settled on a coffee and pastry from our favourite Mullumbimby patisserie, Scratch. Taking our pain aux raisins and frangipani tart to one of the many tables and chairs on the grass, we chatted to some locals. They had detoured via the Sample festival on their way to their weekly shop at the Bangalow Farmers Market, as you do.Weekly farmers markets feature in every town in the Byron region and Bangalow manages two per week.

Our final stop was the Olssons Salt Cooking Stage, where a well known chef was going head to head with a Lismore TAFE student in a Mystery Box competition. Given a box of ingredients unknown to the chefs before the start, one needed to produce a dish featuring kangaroo steak with beetroot and kale and the other a dish featuring scallops, prawns and similar vegetables. The audience sat in wrapped attention as we were led step by step through the cooking processes – the final results looking spectacular. We liked the seafood wontons and the fish decorated with beetroot and kale produced by Courtney, the final year student.  The final touch came when she was offered an apprenticeship with a Byron resort manager in the audience.

The region will continue to inspire us with Murwillumbah hosting the Tweed Foodie Fest in late September and Lismore promoting Eat the Street food festival in March. Watch this space!